Kourtney Kardashian has taken the internet by a storm as she makes her relationship with American musician Travis Barker official on IG. Take a look.

Keeping Up With The Kardashians fame Kourtney Kardashian has taken the internet by a storm as she makes her relationship with American musician Travis Barker official on Instagram. The actor took to her Instagram handle on Wednesday, February 17, 2021, to reveal the news to her fans with an adorable picture. Kourtney Kardashian also did not add any caption to the post as the picture itself has a lot to say. Fans cannot stop gushing on hearing the news as they went on to flood the comment section with all things happy and love.

Taking to her Instagram handle, Kourtney Kardashian shared a sweet picture of the duo that is sure to make fans go gaga. In the picture, Kourtney and Travis’ hands can be seen intertwined with each other. The duo can be seen sitting in a car as they take this pic together. One can also notice Kourtney’s well-done nails and Tavis’ tattoos all over his hand. Take a look at the picture below.

Also read | Kourtney Kardashian's Dating History: Here Is A Look At Who The Model Has Dated

As soon as Kourtney Kardashian shared the post online, fans could not stop themselves from commenting on all things adorable. Apart from fans, several celebrities like Miranda Kerr, Olivia Pierson, Christine Quinn and many more went on to leave sweet comments. Some of the users could not stop gushing over the picture, while some went on to celebrate their love. One of the users wrote, “I’m into this”, while the other one wrote, “omg, this is super sweet”. Check out a few comments below. 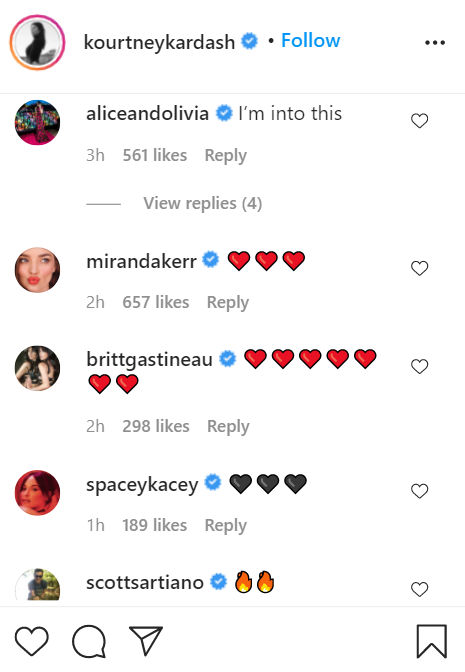 According to People, Kourtney and Travis enjoyed a trip to Palm Springs, California during late January where her mother Kris Jenner has a home. The Keeping Up with the Kardashians reality star and the Blink-182 drummer both posted pool views of the backyard of the house on their Instagram stories.

Kardashian and Barker have known each other for years. Barker had previously made short cameos on the reality show Keeping Up with the Kardashians in addition to living in the same town of Calabasas, California. Over the years, the couple has also been spotted on a number of outings together in Los Angeles.