Kourtney Kardashian took to her Instagram to share a throwback picture from her family trip to Mexico. She is seen sporting pink bikini, check it out.

Kourtney Kardashian recently took to her Instagram to share a throwback picture from 1994. In the picture, the young Kourtney is seen holding a towel while wearing a pink bikini. The picture has been taken from a height, as she looks up at the camera. In the same room, her sister Khloe seems to be busy with a bean bag while wearing a white t-shirt.

The caption reads, "Cabo San Lucas, Mexico 1994". The comment section is filled with her followers commenting about her facial expression being the same over the years. Some users asked her if she misses Mexico. Check out her post. 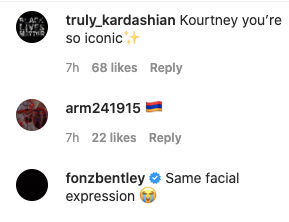 It looks like the Keeping Up With Kardashian fame Kourtney has been missing travelling to other countries. Two weeks ago, she shared a picture from her trip to Italy. She added in the caption that the trip was in 2019. Check out the post.

According to People, Kourtney is currently dating Blink-182 drummer Travis Barker and that the couple took a trip to Palm Springs, California over the weekend. Since the news broke out, Kourtney Kardashian's photos have been flooded with questions about the drummer. Earlier she shared a picture with her son Reign while going on a trek. One of her fans popped the question about Travis' presence. Check it out.

A source told Hollywood Life that Kourtney has made herself 'available all the time' for Kim as she is working through her issues. With her own experience after publically splitting up with Scott Disick, Kourtney is advising her sister on how to keep the children out of the mess and social media. They are currently in Los Angeles with North, Psalm, Chicago and Saint while Kanye is still spending time in Wyoming Ranch. Earlier, Kim was spotted celebrating Christmas at Kourtney's house.