Kylie Jenner is one of the most popular celebrities worldwide who has been starring in the series Keeping Up With Kardashians since 2007. According to Forbes, in 2019, Jenner’s net worth was estimated at US $1 billion dollars making her the world’s youngest self-made billionaire as of March 2019 when she was 21. Jenner has her own YouTube channel with 10.2 million subscribers and earlier today she asked her Twitter followers for suggestions for her upcoming YouTube videos.

Earlier today, Kylie Jenner took to her Twitter handle to ask her fans for some suggestions for her new videos. Jenner said she was filming new YouTube videos this month and she needed suggestions on what her followers wanted to see. Check out the tweet on Kylie Jenner's Twitter here-

Kylie Jenner’s tweets always get reactions from each and every corner of Twitter. Many members of the Twitterati can be seen responding to the post with varieties of suggestions. There were several quote retweets by users who wanted her to shoot a video with her three-year-old daughter Stormi. Her followers wanted to see her videos with Stormi, their day together, moments with Stormi and even watching her cook with Stormi present. YouTube FaZe Rug retweeted “A COLLAB IS MY DREAM. LET’S DOOOO IT” which got more than 7K likes.  Check out the retweets and comments with suggestions for Kylie Jenner's video- 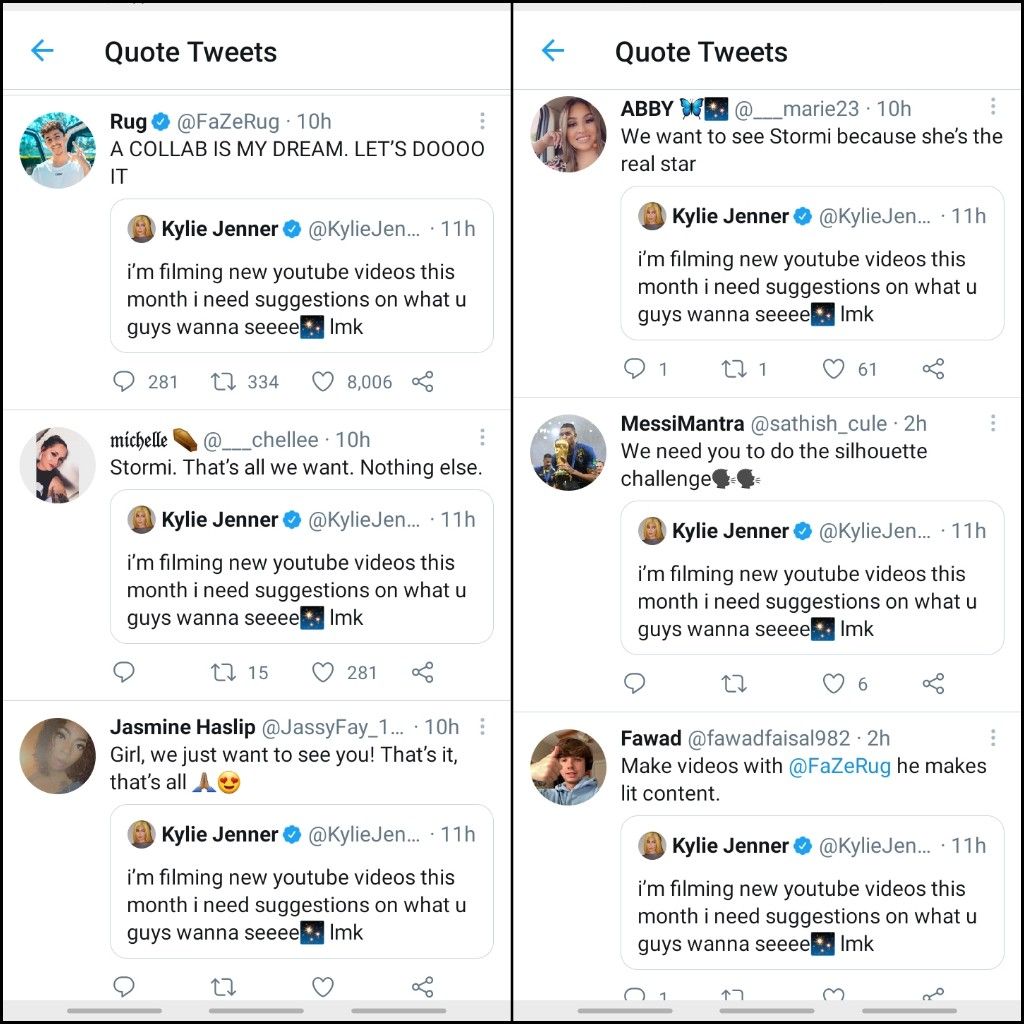 Kylie Jenner's videos have often featured her family members from Keeping Up With Kardashians (KUWK). She has uploaded vlogs with her mother Kris Jenner and her other famous sister Khloé Kardashian also featured in several of her videos. She has made videos with behind-the-scenes clips from her numerous photoshoots and also BTS from the KUWK show. Kylie Jenner owns a cosmetic company called 'Kylie Cosmetics' and she has made many makeup tutorials for her brand on her YouTube channel. Her last video was uploaded about a month ago in which shared the glimpses of Christmas Decoration in her house.