Ahead of Christmas, beauty mogul Kylie Jenner shared a video on her official YouTube channel where she can be seen baking cupcakes with daughter Stormi.

Ahead of Christmas festivities, beauty mogul Kylie Jenner shared a video on her official YouTube channel where she can be seen baking Christmas-themed Grinch cupcakes with daughter Stormi. The video showcasing the mother-daughter duo spending some quality time together and baking a cake has been well-loved by her fans. The five-minute-long recording was shared on Jenner’s official YouTube channel on November 19. “Kylie Jenner: Grinch Cupcakes with Stormi,” reads the caption shared alongside the post.

The recording opens to a shot of Jenner and Stormi standing behind a kitchen island wearing matching Grinch sweaters. The mother-daughter duo starts making the sweet treats by mixing sticks of unsalted butter. Jenner then asks Stormi to add sugar into the mix. The endearing video and the adorable reactions of little Stormi in it has have captured netizens’ attention. It currently has over 4.3 million views and many appreciative comments. The caption of the video also explained that the beauty queen is celebrating the day as she is set to launch her new collection 'Kylie X Grinch'  on her website which is going to be a limited Grinch holiday collection for her fans.

Given the high cuteness quotient of the recording, the number of fans commenting and showing their love towards it has been increasing. One of the users commented under the video and wrote, “Stormi is the cutest.”n Another user commented, “Stormi is quite literally the cutest and most well-mannered child.” A third user chimed in and wrote, “Kylie, you have raised your baby so well.” Another echoed similar sentiments and wrote, “Stormi is such a positive, polite and lovely child.” 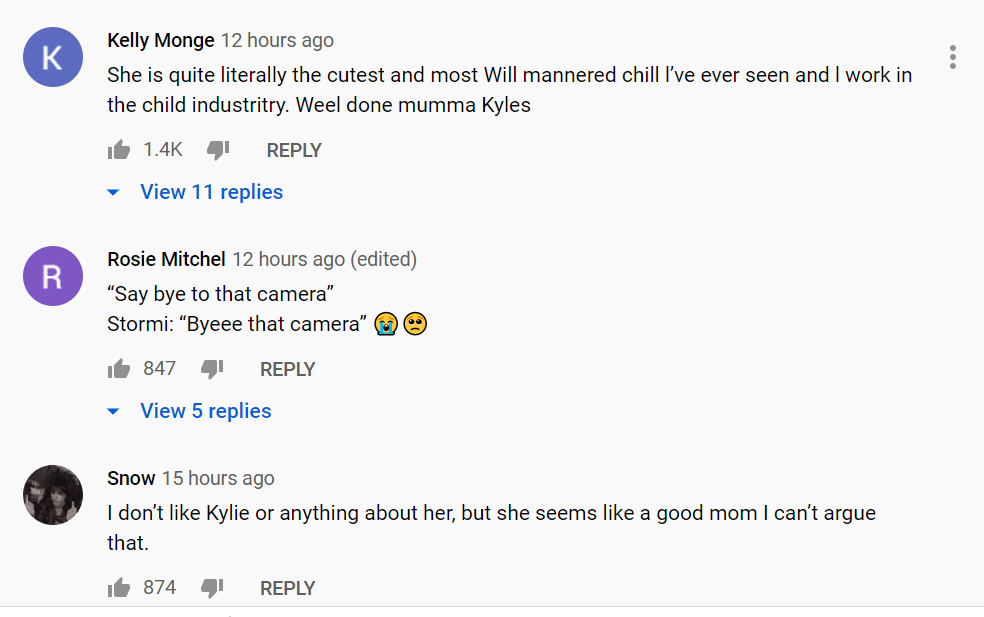 Meanwhile, during her interaction with Charles for the Halloween makeup tutorial, the Keeping Up with the Kardashians star spilled the beans about her personal life, right from explaining the reason why she doesn't keep it real on social media to wanting more kids 'so bad'. Kylie revealed that she thinks about having another bundle of joy every day, but admitted not having the time to make it happen. During their fun banter with each other in the 18 minutes-long YouTube video, Kylie was all praise for her two-year-old, Stormi Webster. The owner of Kylie Cosmetics called Stormi the 'best baby of all time' and expressed how happy she is to see her grow up.

WE RECOMMEND
3 weeks ago
Kylie Jenner cuddles with Carter Gregory, fans wonder if he's her 'new boyfriend'
1 week ago
Kylie Jenner looks glamorous as she dons pink corset in rose-filled bath tub
4 weeks ago
Did you know Kendall Jenner and Kylie Jenner have popular celebrity as their Godmother?
3 weeks ago
Did you know that Kris Jenner has a special nickname that her grandkids call her?
1 week ago
Kris Jenner wishes boyfriend Corey Gamble with series of images on Instagram