Kylie Jenner recently posted a few pictures of herself flaunting the summer body. Have a look at how Diljit Dosanjh expressed liking towards the picture.

Diljit Dosanjh’s affection for Kylie Jenner has not been a secret on social media. Kylie Jenner recently uploaded pictures from her vacation where she can be seen flaunting her summer body. One of the many people to like the post has been none other than fanboy Diljith Dosanjh.

Diljit Dosanjh is a Bollywood actor who is much-loved for his sense of humour and fun-loving nature. His affection towards the reality show star Kylie Jenner has been no secret affair. He has time and again expressed his love for her through various comments on her post.

In the latest updates, Kylie Jenner uploaded a few pictures while she was enjoying the summer sun. In the pictures posted from her vacation with friends and daughter Stormi, she can be seen wearing a swimsuit along with a long plaited tail. She can also be seen wearing matching sneakers with the look. Dijit Dosanjh can be seen appreciating the look by liking her picture. Have a look at the posts here. 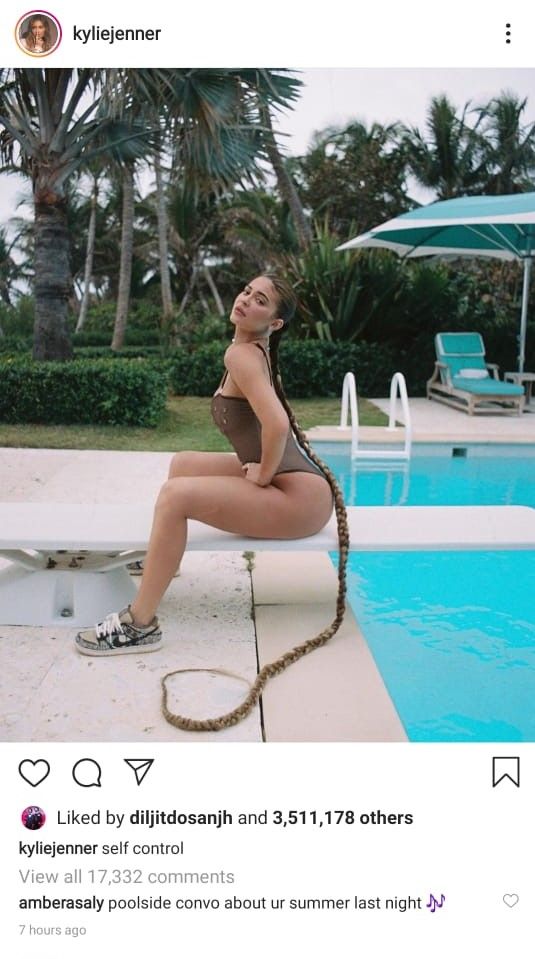 Also read Kylie Jenner Flaunts Her New Hair And $150,000 Handbag While Travelling On A Private Plane

Diljit Dosanjh had recently cropped himself into a picture which was clicked by Ivanka Trump. He pinned up a picture of himself to the right of Ivanka. He also had the most hilarious caption as he wrote that Ivanka was the one to ask him to take her to Taj Mahal. The picture was also shared by her later. Have a look at Diljit Dosanjh's photos here.

Thank you for taking me to the spectacular Taj Mahal, @diljitdosanjh! 😉

It was an experience I will never forget! https://t.co/VgqFuYBRIg

Also read Kylie Jenner's Home Can Be An Inspiration To Design Your Own, Here Are Some Decor Ideas

PEOPLE HAVE PLEDGED SO FAR
Halsey flaunts yellow bikini as she grooves to 'Canyon Moon' by Harry Styles
R Kelly wants release from federal prison uses Coronavirus as a defense
Is Angelina Jolie keeping her kids away from Brad Pitt amid coronavirus?
How Tom Felton,Jason Momoa and others spent their weekend amid lockdown?
Amber Heard might get sacked from 'Aquaman 2' cast due to Johnny Depp controversy
DO NOT MISS
WORLI'S KOLIWADA AREA QUARANTINED
DELHI: NIZAMUDDIN SEALED
OLYMPICS TO BE HELD JULY 23-AUG 8
'NO SHORTAGE OF SUPPLIES': AMUL MD
LOCAL TRANSMISSION IN INDIA
KERALA CONSIDERING LIQUOR SALES