Martin Scorsese's daughter Francesca trolls him with a ''Marvel-ous'' gift. Read on to know more details about the whole story.

Martin Scorsese recently made the headlines with his on-going feud with the Marvel Studios. The famed filmmaker had made a comment about the Marvel Cinematic Universe films calling it a ''theme park'', and thus not Oscar-worthy. But in a recent turn of events, the filmmaker was trolled by his own daughter, on the occasion of Christmas. Read more to know how Martin had a ''Marvel-ous'' Christmas.

Francesca Scorsese, Martin’s daughter, took to her official Instagram handle’s story section to post a photo. The photo was of the Christmas gift wrapping she used for her father’s Christmas gift. What made this special and hilarious was the fact that the gift wrapping was Marvel-themed, and had Marvel characters like the Hulk, Ironman, Captain America, Black Panther, and others. Here is the Instagram story by Martin’s daughter Francesca Scorsese: 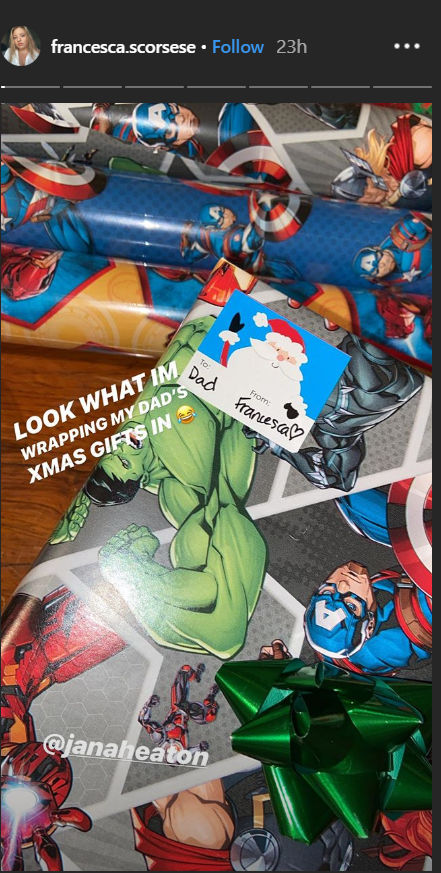 For the unversed, Martin Scorsese earlier spoke about the Marvel movies and said it was not cinema, and the comment garnered attention. After this, the entire Marvel Universe criticised Scorsese for shamming the Marvel films. Things got so heated that the director of Goodfellas had to explain himself to the world, and what he really felt about the issue. It was a hilarious moment for the fans of the director and marvel movies when his 20-year-old daughter trolled him with the Marvel-themed gift wrapping, and fans all over the world were said that it would be more hilarious if the gift contains an Avengers DVD set.

READ | Top 4 Scenes From 'Shazam!' You Must Check Out Before You Watch 'Shazam 2'

After the success of his 2019 gangster flick The Irishman, Martin is all set to give his fans some more hits. He will be seen as the director of the 2021 crime drama Killers of the Flower Moon. The film is a historical crime drama that will revolve around one of the 1920s' major F.B.I. investigations that involved J Edgar Hoover. The film will be based on the novel penned by David Grann and will feature Robert De Niro and Leonardo DiCaprio in the lead roles.

READ | The Last Jedi: Rian Johnson Says It's A ''mistake'' To Not Challenge Star Wars Fans