Matt Damon recently took a dig at Ben Affleck for losing his Batman role to Robert Pattinson an upcoming The Batman film. Watch the video and know more.

Matt Damon has poked Ben Affleck on losing the Batman role to Robert Pattinson. The two actors have been buddies for decades and have appeared in several films together. So as Damon trolled Affleck, the latter also tried to give it back.

Ben Affleck and Matt Damon are working together to help raise money for the Eastern Congo Imitative and Water.org. They recently released a video to promote their cause through Omaze contest. In it, one lucky winner will get to fly out to Los Angeles,  hang out and have lunch with the two stars.

In the video, Matt Damon takes a dig at his friend Ben Affleck for dropping out as Batman, which then went to Robert Pattinson. Affleck tried to make a comeback by bringing up the Bourne franchise, referring to Jeremey Renner. However, Damon counterattacks that he is still the only person to essay Jason Bourne in the films, and Renner was bought in to widen the Bourne universe, unlike his case where the movie is completed shut down. Check out the video below.

Matt and I have joined forces with @omaze to offer you the chance to come and hang out with us in Hollywood (once it’s safe to travel) and help @easterncongo & @water provide resources and support to communities in need. Enter now at omaze.com/la (link in bio) Over 10 years ago, Whitney Williams and I founded the @easterncongo Initiative to help support people in the region. After enduring a generation of armed conflict (and the recent struggles that the entire world has faced during this global pandemic), the people of the Democratic Republic of the Congo’s brilliance, creativity and determination shows the rest of us what's possible.

Ben Affleck and Matt Damon’s friendly funny banter grabbed much attention. People flooded the comment section supporting 'Batfleck', writing that he is still the Batman. The actor would be wearing the cape and cowl again in the upcoming The Flash movie. Several users also praised Damon and Affleck’s friendship. Take a look at a few comments. 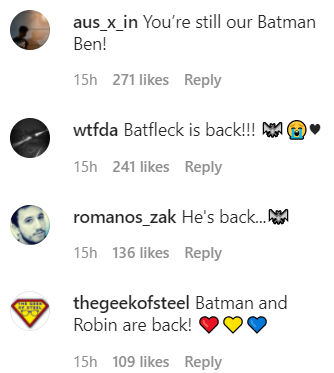 Also Read | On Matt Damon's Birthday, Here's A Fun Quiz To Test How Well You Know The Superstar

Ben Affleck and Matt Damon will soon be seen together again in The Last Duel. The movie also stars Nicole Holofcener, Adam Driver and Jodie Comer. Directed by Ridley Scott, it is a historical drama-thriller film, based on The Last Duel: A True Story of Trial by Combat in Medieval France by Eric Jager. The adaptation is written by Affleck, Damon and Holofcener. It is currently filming and is scheduled to release on October 15, 2021.

WE RECOMMEND
3 weeks ago
Matt Damon's birthday: Take a look at some funny and memorable cameos of the actor
4 weeks ago
Ben Affleck might return as Bruce Wayne in a solo Batman film BUT on one condition
3 weeks ago
On Matt Damon's birthday, here's a fun quiz to test how well you know the superstar
4 weeks ago
'The Martian' filming location left fans wondering about how Matt Damon shot the film
1 month ago
Justice League’s Snyder Cut releases new images of Ben Affleck’s Bruce Wayne / Batman