Matthew McConaughey recommends 'The Wedding Planner' during the third session of #McConaugheyTakes. Check out behind the scene fun from the film, here

A post shared by Matthew McConaughey (@officiallymcconaughey) on May 1, 2020 at 8:24am PDT

ALSO READ: Matthew McConaughey Kick-starts #McConaugheyTakes With 'How To Lose A Guy In 10 Days'

Matthew McConaughey recalls that before the shoot of The Wedding Planner began, a writer’s strike was announced and hence the filmamkers were looking for the lead desperately to begin shoot because they were certain that their would be no content to work on for sometime now. He laughs about getting paid extremely well because he knew they had the writer’s strike coming up and hence the crew needed him to say yes quickly to the film.

While talking about his co-star Jennifer Lopez, he said that he always called her ‘quad threat’ as she does everything well. He stated that she is like clockwork, just hammers the shot, she just knocks it out. Matthew McConaughey revealed that not many films are shot in Los Angeles, but they shot The Wedding planner in LA. He concluded by saying that he had a lot of fun doing The Wedding Planner. 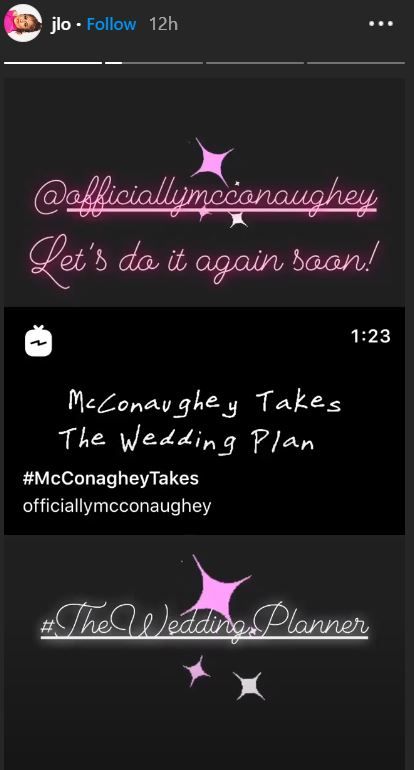 After he tagged Jennifer Lopez in the post, she added the video on her Instagram story stating that they should do another film together. She also posted a sweet video from the film, The Wedding Planner where her character can be heard saying that she feels she isn’t enough. Matthew McConaughey commented on her post saying, ‘you are more than enough.’ [sic] 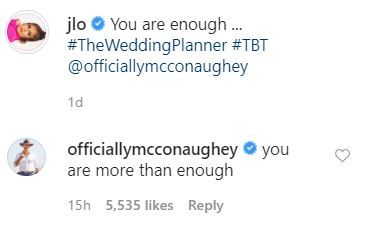 Matthew McConaughey suggested a few weeks back that while the world has been in lockdown, everyone has a lot of free time to screen and check out new films. He revealed that in this new segment called #McConaugheyTakes he would recommend a few of his films. Matthew McConaughey would also give a few behind the scene or unheard gossips about the movie that he recommends.

PEOPLE HAVE PLEDGED SO FAR
LATEST NEWS
View all
10 hours ago
Kourtney kardashian shares throwback pic from a trip, calls it an 'escape to the desert'
8 hours ago
David beckham mocks wife victoria for looking like ross from 'friends'; here's why
10 hours ago
'dynasty' cast's net worth proves that they're just as wealthy as the reel 'carringtons'
6 hours ago
Kim kardashian shares her high-intensity workout routine that she follows amid lockdown
8 hours ago
Doja cat apologises for 'offensive' title of old track, but denies racist comments