Michael B. Jordan and his GF Lori Harvey were been playing lowkey for several months. Finally, the couple has now officially announced their relationship on IG.

On January 11, Monday, Michael B. Jordan took to his Instagram handle and shared a series of pictures with Lori Harvey. These Instagram images were dark, however, one could spot the couple posing close to each other. In the first picture, a shred of light makes the couple visible for the camera, while in the second one, Michael and Lori stood close facing each other.  The actor did not write anything in the caption. Take a look at Michael B. Jordan's Instagram post.

Meanwhile, at the same time, along with Michael, Lori Harvey also shared a collage image with the former. In this Instagram post, the couple posed under the Christmas tree. In one of the pic, Michael kisses Lori on her cheeks. The duo surely look adorable. Sharing this post on social media, Lori Harvey dropped a heart emoji in the caption. Take a look at Lori Harvey's Instagram post with Michael B. Jordan.

Michael B. Jordan and Lori Harvey fans were surprised with the announcement. Several fans and followers commented on the celebs' Instagram post. One of the users commented, "Love this! Congrats!", while another added, "This makes me happy yo more love all 2021".

Lori Harvey's brother jokingly added, "Hold on! Who is the nigga all on my sister tho!". Another fan of Lori commented, "Lori you look like finally At home". One of Michael's fans wrote, "Good ol Black love! That’s what I’m talkin’ bout!!". Jordan's huge female fan following seemed sad about this announcement. Take a look at some more fans' reactions below. 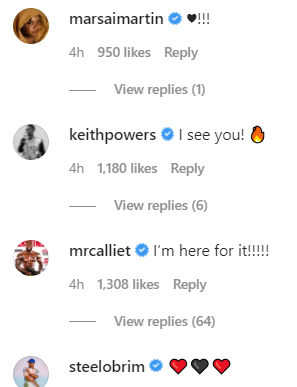 Also Read | Michael B Jordan reveals that he will soon come up with an "OnlyFans account"; Details