hooting of the film Mission: Impossible 7 starring Tom Cruise has begun filming and director McQuarrie shared a breathtaking picture from the set.

Amongst the upcoming films that suffered a major setback due to the ongoing pandemic was Christopher McQuarrie's directorial film Mission: Impossible 7. The shooting of the film was supposed to kickstart in Venice in February before moving to Rome. However, since the coronavirus situation in Italy became worse, the shoot had to stall. Now the shooting of the film starring Tom Cruise has begun filming and the director McQuarrie shared a breathtaking picture from the set to inform the fans.

In the picture from the set, an unidentified man was spotted atop a scaffolding with the picturesque mountain view engulfing the background. Going by the picture, it seems that the upcoming film is going to showcase some amazing stunts with high octane action sequences that are going to be performed by Tom. While captioning the post, the director wrote, "Action... #MI7 Day 1." Currently, the team is in Norway shooting for some sequences.

Read: Did You Know Tom Cruise Held His Breath For 6 Minutes During 'Mission Impossible 5'?

Read: Tom Cruise Movies Quiz: Check Out How Much You Know About The 'Mission Impossible' Star

A post shared by Christopher McQuarrie (@christophermcquarrie) on Sep 6, 2020 at 9:14am PDT

Several fans of the film were quick enough to pour in their love and excitement over the film. One of the users who was captivated by the beauty of the shooting location wrote that finally the team has started filming and the location seems so scary. Another user after seeing the location assumed that Tom Cruise is going to jump off that place to perform a stunt. A third fan of the film chimed in and expressed his eagerness to watch the film as soon as possible. Another user was puzzled after seeing the picture and asked the director to reveal the man walking on the bridge in the picture. 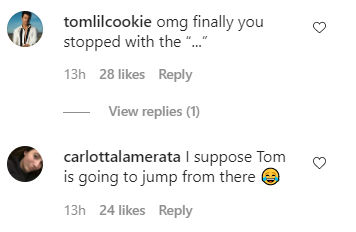 Mission: Impossible 7 is helmed by Christopher McQuarrie, who has also directed the previous two installments. Tom Cruise will return as Ethan Hunt, along with Simon Pegg, Rebecca Ferguson, Ving Rhames, Henry Czerny, and Vanessa Kirby, reprising their characters in the franchise. The new cast features Esai Morales, Hayley Atwell, Pom Klementieff, and Shea Whigham. Mission: Impossible 7 has already been pushed ahead from its initial release date of July 23, 2021, to November 19, 2021.