Nick Jonas just got clicked by Priyanka Chopra while performing meditation on a yacht. The duo is together celebrating New Year's Eve in Atlantis, Dubai.

Christmas seems to be all happening and enjoyable for Nick Jonas and Priyanka Chopra. The lovebirds have celebrated Christmas 2019 in quite a unique way with a snowmobile ride. On Christmas eve, Nick Jonas shared a video of their beautiful celebration where the couple rolled in the festive vibe, preparing cute cookies at home. After this, the duo escaped to the Mammoth Mountains in California, to enjoy the snow and its mesmerising beauty, and then escaped to an island to bask in the sunshine. Looks like Nick Jonas and Priyanka Chopra's happy vacay has no end. On December 31, Nick shared another glimpse of himself on a yacht ride, while he got clicked by Priyanka.

Nick Jonas is currently vacationing with Priyanka Chopra on an island, and the couple is supposed to ring in New Year's Eve together. Nick Jonas is gearing up for the big night, by indulging in some early morning-meditation. Nick shared the picture that was clicked by Priyanka and shows him all poised with his front facing the ocean. The duo was travelling on a yacht when Priyanka captured this candid image of Nick from behind. Have a look: 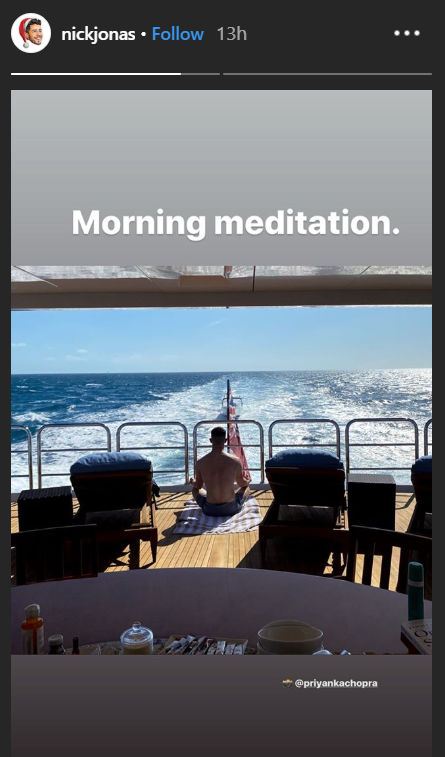 Also Read | Nick Jonas And Priyanka Chopra Think That Trust Falls Are "2019", Do This Instead

Nick Jonas uploaded a video with Priyanka Chopra on December 27, from Mammoth Lakes in California, in which the two can be seen sliding in a tube through a slippery snow path. The couple can be heard asking the person to spin the tube. In the end, Priyanka Chopra can be heard saying, “We held on Babu.” She also mentions how they passed the test. In the caption for the post, Nick Jonas wrote about how the new thing for 2020 is “trust tubing spins”. Have a look: