'Baywatch' star Pamela Anderson recently split from her husband in less than two weeks of getting married at a secret ceremony in Malibu earlier last month.

Actor Pamela Anderson has been in the news for her recent marriage and then divorce a few days with her rumoured long time beau, producer Jon Peters. The Baywatch star split from her husband of less than two weeks, Jon Peters earlier this month. Anderson, 52, and Peters, 74, got married in Malibu on January 20 in a private ceremony but never filed for a marriage certificate.

A post shared by The Pamela Anderson Foundation (@pamelaanderson) on Feb 8, 2020 at 4:48pm PST

Recently, she posted a long message of encouragement for herself as she wrote, "We are all getting our share in this crazy world". She added, "As long as we are wrestling we are alive. As long as we recognize insanity we are sane."

Speaking about betrayal and disappointment, she wrote, "It is better to be betrayed than not to trust, better to be disappointed than not to love. Don't ever run from pain, just face it allow it to be and it will pass. And we will have grown to the next level." The message was shared on top of a black-and-white photo of the 52-year-old actor on the actor's Instagram stories. 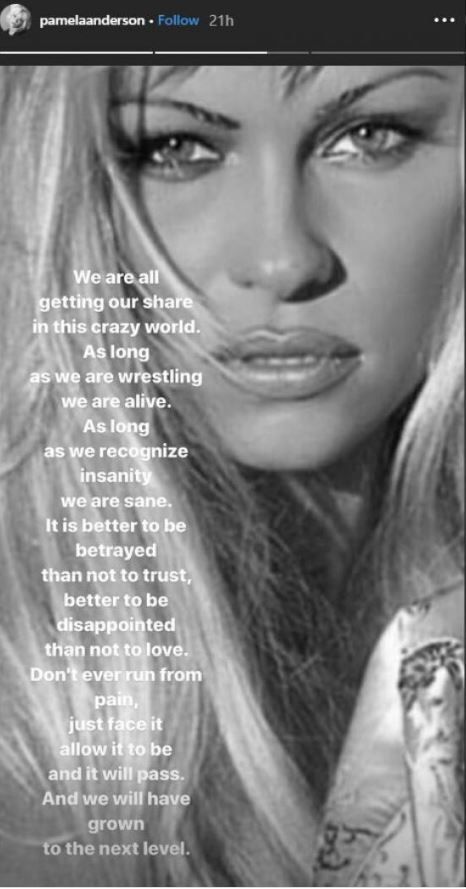 News of the actor's separation from her husband came within two weeks of their wedding.

"I have been moved by the warm reception to Jon and my union. We would be very grateful for your support as we take some time apart to re-evaluate what we want from life and from one another.", said Pamela Anderson in a statement.

"Life is a journey and love is a process. With that universal truth in mind, we have mutually decided to put off the formalization of our marriage certificate and put our faith in the process. Thank you for respecting our privacy," Anderson said in a statement to an international entertainment news portal.

PEOPLE HAVE PLEDGED SO FAR
Black Widow's death to Loki turning into a woman - Marvel Universe theories will shock you
Evangeline Lilly apologises after refusing self-quarantine amid coronavirus outbreak
Kylie Jenner has a No. 1 fan from Bollywood and it is not Diljit Dosanjh
The Masked Singer Updates: The face behind the T-Rex is finally unmasked
'Contagion's' cast teams up with scientists amid the COVID-19 crisis to share PSA videos
DO NOT MISS
275 INDIANS RETURN FROM IRAN
BAGGA RESPONDS TO TEJ PRATAP YADAV
SONAM KAPOOR ON COVID-19
PAK COVID-19 CASES COUNT
PM'S FUND: CELEBS MAKE DONATIONS
GOOGLE'S 3D ANIMAL FEATURE