Priyanka Chopra Celebrates Success As Film 'We Can Be Heroes' Hits #1 On Netflix Globally.

Priyanka Chopra recently celebrated the success of the kiddie superhero film 'We Can Be Heroes' as the Netflix films came No.1 on the streaming service globally

Priyanka Chopra recently took to social media to celebrate the success of the newly released kiddie-superhero flick, We Can Be Heroes on Netflix. The film, released worldwide on December 25, 2020, was directed by Robert Rodriguez, well known for directing Sin City (2005) and Alita: Battle Angel (2019). The Netflix film, which also has The Mandalorian star Pedro Pascal, debuted No.1 on Netflix's Top 10 films streaming globally. Priyanka Chopra had recently taken to her Instagram to share the good news. The actress also penned a note of gratitude for all her fans that read, "We Can Be Heroes. BROKE THE NETFLIX RECORD by hitting #1 in the world again today! From myself and the heroics, THANK YOU for your love and support on this film!" Take a glimpse at her story update here: 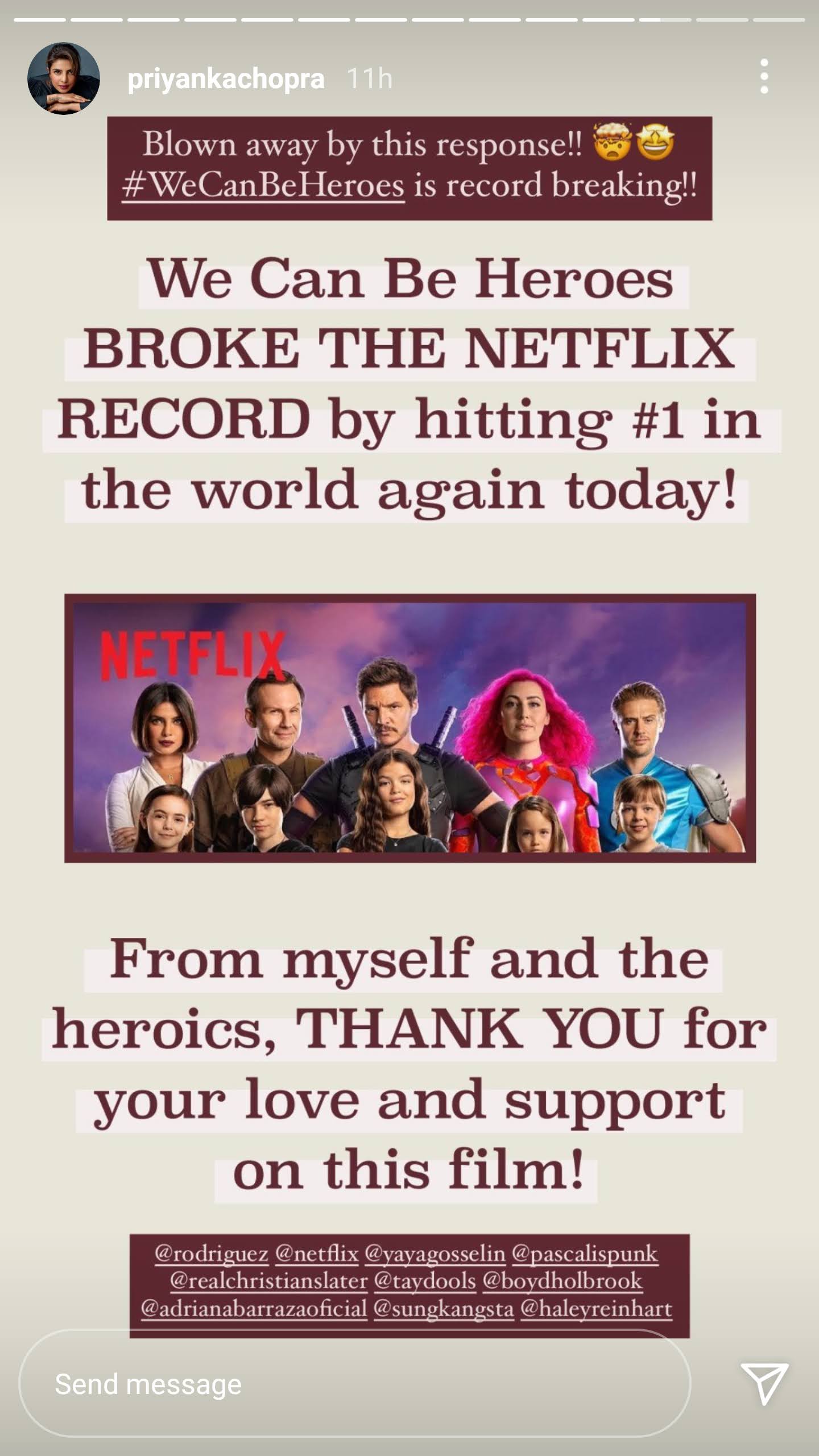 More about We Can Be Heroes on Netflix

The film We Can Be Heroes cast also features Pedro Pascal, Boyd Holbrook, Christian Slater, Sung Kang, and others in the lead roles. According to E! Online, the film is reportedly a sequel to Robert Rodriguez' directed The Adventures of Sharkboy and Lavagirl that was released in 2005. The film had received mixed reactions from critics, many who felt that the film did not 'exceed expectations' in comparison to Rodriguez's previous film Alita: Battle Angel, which was produced by James Cameron. In 'We Can Be Heroes', Priyanka Chopra stars as Mrs Granada, the leader of 'The Heroics' organization which is filled with super-powered people. The film was released on Christmas Day 2020 and has surprisingly managed to remain in #1 in the top 10 Netflix films trending globally for a record 19 days. Currently, Priyanka Chopra has been busy promoting her upcoming drama film 'The White Tiger', directed by Ramin Bahrani and also co-starring Rajkummar Rao and Adarsh Gourav. The film is scheduled to release on 22 January 2021. She also shared an update earlier in January, that a We Can Be Heroes sequel is in the works. She will also be seen in the upcoming fourth Matrix film alongside Keanu Reeves and Carrie Ann Moss, directed by Lana Wachowski.