Priyanka Chopra Jonas took to Instagram to wish the American rapper Dr. Dre a speedy recovery after he was hospitalized recently. Read on to know more about it.

American rapper Dr. Dre recently suffered from a brain aneurysm on January 4 and was rushed to the Cedars Sinai Medical Center in Los Angeles and was immediately taken to the ICU. Isn't It Romantic actor Priyanka Chopra Jonas took to her Instagram story to wish Dr. Dre a speedy recovery. Read on to know more about Dr Dre's health and Priyanka Chopra's Instagram story.

Dr. Dre was hospitalized recently because of a brain aneurysm and was taken to the ICU immediately. Dr. Dre was stable and lucid within hours of his admission. However, the medical professionals at the Cedars Sinai Medical Center were still uncertain about his brain bleed. The doctors also ran multiple tests to find the cause of Dr. Dre’s brain aneurysm. Wishes for his speedy recovery poured in from all of Hollywood as well as his fans and followers and recently, actor Priyanka Chopra Jonas took to her Instagram story to wish him a speedy recovery. She shared a black and white picture of the rapper in his studio and wrote, "sending you prayers and positive vibes". She also tagged the rapper in her story and followed it up with a heart and prayer hand emojis. You can see Priyanka Chopra's Instagram story here. 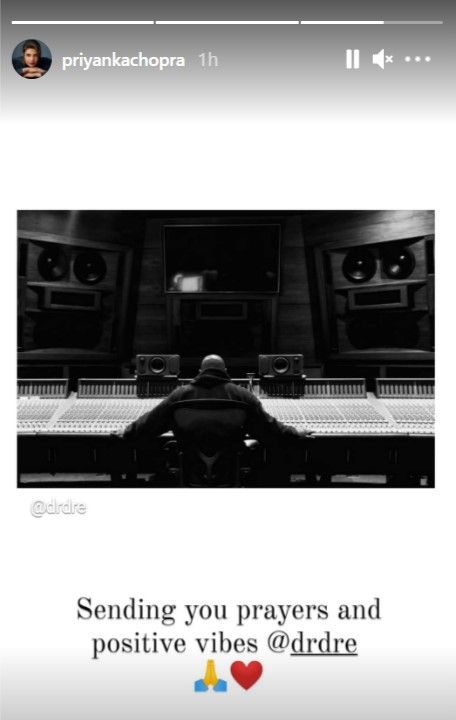 The America rapper took to Instagram on January 6 to share his health update with his fans and followers. He shared an image of him sitting in the studio, and captioned the post, "Thanks to my family, friends, and fans for their interest and well wishes. I’m doing great and getting excellent care from my medical team. I will be out of the hospital and back home soon. Shout out to all the great medical professionals at Cedars. One Love!!". His post received more than 1.5 million likes within a day of posting. You can see it here.

Also Read | Priyanka Chopra Slays In Her Black Ensemble, Pairs It Up With Embellished Crocs

Meanwhile, Priyanka Chopra Jonas just had a Netflix release, titled We Can Be Heroes, where she played the character of Ms. Granada. The global icon is currently in London to shoot for her upcoming film Text For You. The film is a remake of the German film SMS Fur Dich and also stars Sam Heughan, Celine Dion, Russell Tovey, and Omid Djalili.