Priyanka Chopra Jonas Sizzles In Her Latest Photoshoot; Check Out The Pics

Priyanka Chopra Jonas is known for shelling out fashion goals. The actress knows how to excel in all her looks and never misses a chance to do so. Read more.

Priyanka Chopra Jonas is known for shelling out fashion goals. The actress knows how to excel in all her looks and never misses a chance to do so. She enjoys a massive fan following on social media and treats her fans with her posts regularly. Recently, she shared multiple pictures from her latest photoshoot.

In her post, she can be seen in a woollen outfit and accessorized her look with a silver-coloured neckpiece. Her hair was tied up and she added a pink scarf to her look. She captioned her post by writing, ‘Sunday.’ Many fans and celebrities commented on her post in large numbers. 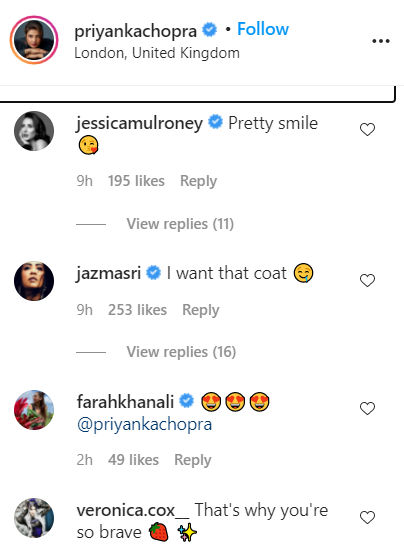 In the other picture, she was seen in a full sleeve and a thigh-high slit dress. She added a pair of light blue belly sandals to her look. She posed by leaning against the wall.

Priyanka Chopra has recently finished the shooting of her upcoming Hollywood film named Text For You in London. Earlier, she shared a picture of the same on her Instagram. She was seen holding the script in a casual outfit and captioned her post saying that it was a wrap. She also congratulated and thanked the entire cast and crew. Along with this, she shared a selfie of herself from the last day on set and wrote about how she would miss the crew.

Text For You is directed by Jim Strouse and will also star Sam Heughan, Celine Dion, Russell Tovey, Steve Oram, Omid Djalili along with Priyanka. It is a remake of the 2016 German film SMS für Dich.

On the other hand, she is currently gearing up for the release of director Ramin Bahrani's film named The White Tiger. The film casts Adarsh Gourav, Rajkummar Rao and Priyanka Chopra Jonas. It is slated to release on Netflix on January 22.

Also read: Priyanka Chopra Jonas 'reflecting' On The Last Monday Of The Year 2020