Priyanka Chopra Shares Her Immunity Boosters List Which She Swears By

Priyanka Chopra's next movie 'The White Tiger's' first look was recently released! PeeCee is back on the sets & has shared anecdotes to keep herself safe

Priyanka Chopra's film The White Tiger's first look released yesterday. The actor is completely geared up for the release of her Netflix movie. Priyanka is ,however, busy promoting her upcoming horror film called Evil Eye featuring Sunita Mani. Meanwhile, she is busy shooting for her upcoming projects in Holywood. Priyanka recently shared an Instagram story indicating that she is very particular about taking care of her immunity and safety while she is filming during the pandemic. Take a look at her immunity boosters that she showcased a few hours ago where she could be seen getting ready for shoot.

Priyanka Chopra shared a snip of the Immune Complex that she consumes to keep her Immunity levels high during her time on sets. The immune complex consists of Immunity support, Supreme C, Zinc Plus, Vitamin D Extra and N-Acetyl L-Cysteine. The Immunity complex is from The WELL company, which is a popular modern wellness club in New York City. 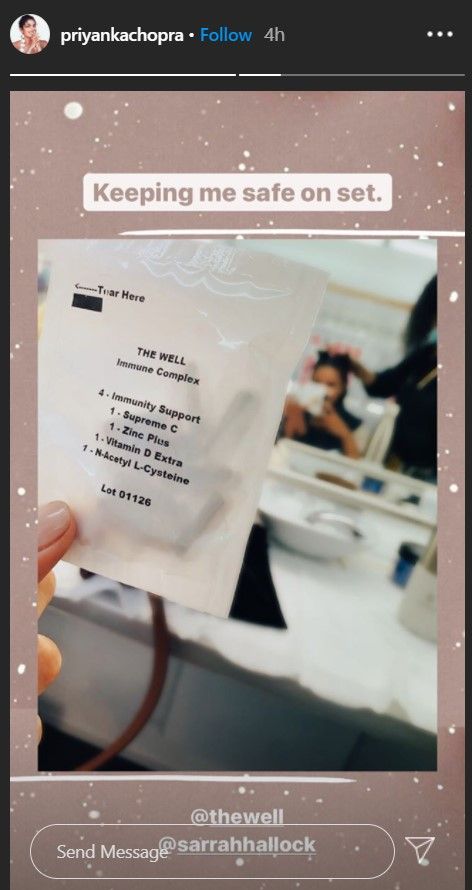 Priyanka Chopra has a series of movies lined up for the future. She will next feature in Robert Rodriguez’s superhero film We Can Be Heroes. It will serve as a stand-alone sequel to the film The Adventures of Sharkboy and Lavagirl. She will also join the hit Matrix franchise for its fourth instalment. In The Matrix 4, Keanu Reeves, Carrie-Anne Moss and Jada Pinkett Smith reprise their roles. Fans of the global star are excited to watch her in this sci-fi action film. Priyanka will be seen opposite Richard Madden in Citadel, which will stream on Amazon Prime Video. If the rumours are to be believed, Priyanka will be next seen in the biopic of the late astronaut, Kalpana Chawla as well.

ALSO READ| Priyanka Chopra Jonas On The Indian Representation In 'Evil Eye': 'It Compelled Me'

Disclaimer: The information provided on this website has been displayed from a published source and is provided only as a guide. All facts, details are for information purposes only. Republic Media Network does not intend to diagnose, prescribe or replace the advice of professionals. We do not guarantee the accuracy of all the information presented and accept no liability in respect of any error.