Priyanka Chopra took to her Instagram account to congratulate comedian Hasan Minhaj as he welcomed a baby boy. Take a look at the post here to know more

Comedian Hasan Minhaj who is famous for his presence in shows like The Daily Show and also has a Netflix special known as The Patriot Act recently took to his Instagram to share a picture of him and his wife Beena and his newborn son. Many celebs congratulated Hasan on the birth of his son. Priyanka Chopra also was among those celebs who congratulated Hasan Minhaj.

In this post, we can see Hasan Minhaj and his wife Beena. Hasan is seen holding his son while his wife is looking at her son. Hasan Minhaj captioned the picture by writing “Even in these crazy times there are so many beautiful moments. Welcome to the world little guy. The Minhaj family grows, and according to Beena, it’s done growing. But ya never know, shooters shoot.” Priyanka Chopra commented on this post by writing “Congrats guys”. Take a look at it here. 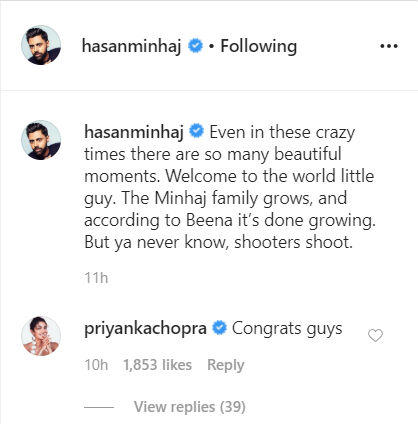 Priyanka Chopra was last seen in the film The Sky Is Pink. In this film, she was seen alongside Farhan Akhtar. This film was loved by critics, but did not do that well at the box office. Priyanka has many projects under her belt. She will be seen in films likes We Can Be Heroes, The White Tiger, The Matrix 4, and Sheela to name a few.

Read Also| Priyanka Chopra Flaunts Natural Undone Hair, Reveals She Has Been In Isolation With Nick