The mercurial hip-hop superstar-turned-footwear magnate, Kanye West is now a billionaire and the credit largely goes to the basketball shoes bearing his name.

The mercurial hip-hop superstar-turned-footwear magnate, Kanye West is now a billionaire and the credit largely goes to the basketball shoes bearing his name that he developed with Adidas, Forbes magazine announced the news on April 24. While announcing the name of the rapper on the list of people worth at least $1 billion, Forbes estimated wealth figures of the rapper as $1.3 billion.

Kanye West shares excitement of being a billionaire on social media

Elated by the news, West shared the news on his Instagram page where he uploaded a video made by Forbes. In the video, West can be seen surrounded by his brand of shoes and the happiness he held in his heart after hearing the news of being a billionaire. The rapper shared the video and captioned it as, "A billy #kanyewest," along with a bag of money emoticons.

As per reports, the 42-year-old, rapper's Yeezy footwear often sells for more than $200 a pair in the United States and elsewhere.
Earlier the rapper and husband of beauty mogul Kim Kardashian was associated with Nike for years but, eventually broke all ties with the leading shoe brand in 2013 and lent his name to Adidas in 2015.

Forbes said that for years West has been pressing the magazine to be listed as one of its mega-rich but that it declined, for lack of proof. The magazine added that much of the rest of West's wealth comes from his real estate business that he owns. Kanye is the second American rapper to make the Forbes list after Jay-Z, who cut last year in 2019.

Read: Kanye West Claims Kobe Bryant Was The 'basketball Version' Of Himself

Fans of the Follow God rapper stormed the post with their congratulatory comments under the exciting news. There were a few of his fans who asked his plans of using the money, while the rest expressed their happiness of reading the good news.
One of his fand wrote, "So, what you’re gonna do with all of these “billys”? I hope and pray that you feed children and help people to have a decent life." Another user sent his best wishes from Uganda and wrote, "Love you Kanye am from Uganda." A third user chimed similar emotions and wrote, "Great job Kayne. Yeeeah, buddy! I look up to you man. That's good news." 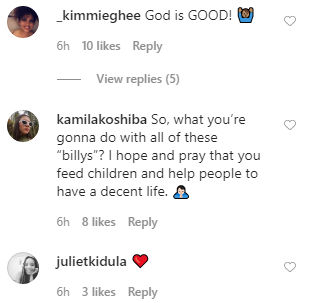 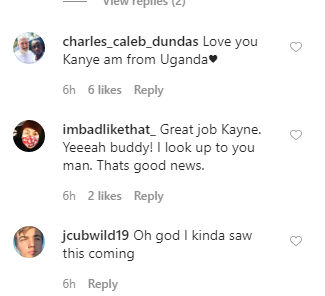 PEOPLE HAVE PLEDGED SO FAR
LATEST NEWS
View all
20 hours ago
Chernobyl' director Johan Renck in talks to adapt novel 'The Magus'
13 hours ago
Weinstein raped me in 1994 at age 17, woman says in lawsuit
17 hours ago
Pulkit Samrat gives a cheesy crown to his "queen" Kriti Kharbanda; Read details
19 hours ago
With a gay protagonist, Pixar short ‘Out’ makes history
1 hour ago
What is Gigi Hadid's real name and why is she called 'Gigi'