Rihanna’s lingerie firm Savage X Fenty has been lauded on the internet for featuring plus-sized models and encouraging body image positivity, shattering the body image stereotypes. The 32-year-old Barbadian singer dropped her first designer Savage X Fenty capsule collection beginning 2020 and is being hailed for launching models of all sizes in her “more inclusive line”. In a dozen posts that are now being circulated on Twitter, users acknowledged Rihanna’s initiative to feature men across all races, colour, shapes, and sizes in the line’s primary men’s collection. The clothing brand’s website flaunts plus-size male models, who not only represent diversity, but also encourage 'body positivity' and normalization of imperfections. 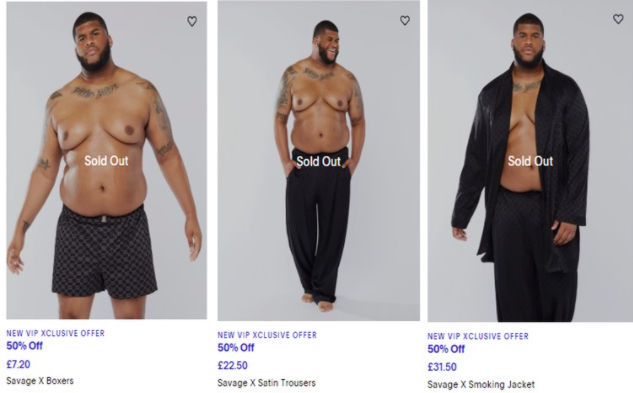 In Rihanna's Savage X Fenty Vol. 2 show that has arrived on the Amazon Prime Video, the singer showcases her debut lingerie collection clad on women of all shapes and sizes in her diverse underwear clothing line-up. In fact, the 32-year-old’s first NYFW show was all about shattering the norms of ‘unrealistic’ beauty standards that, in the world of fashion, mainly revolves around lanky runway models triggering body image concerns among plus-sized women.

Other companies take note this could have been done decades ago and you would make more of that money that you care about. She just locked down the game by making everyone feel like they matter. Funny @HamiltonMusical took over Broadway in the same manner. I love this so much! https://t.co/JPP26tZoJx

Everybody say thank you Rihanna !! pic.twitter.com/7ofI33GzER

HUGE WIN FOR BIG MEN TODAY!! Thank you @rihanna ðŸ–¤ you hold a special place in my heart. #SAVAGEXFENTYSHOW pic.twitter.com/Ivt2FydaUj

Huge hunks were spotted on Rihanna’s SavageX.com clothing website, some with no abs or toned body, but representing natural and realistic physique. The singer and actor earned mega shout-outs on the internet for her brave decision. “OKAY RIHANNA,” the fan wrote, sharing the screen grabs of the plus-sized men. “Big boys season in full effect,” said another, appreciating the singer’s initiative.

“Never in my adult life have I seen a male model that has a similar body to mine,” a male commenter wrote. “I feel almost emotional? Like I finally can buy something I saw and want and know it was made for people like me in mind,” he added. Rihanna’s Fenty fashion house has been constantly campaigning for inclusivity since its launch in 2017. Mostly, Fenty’s in-store displays consist of men and women resembling real people.

Yo it’s big man season! Lets get it

BIG BOY SEASON IS IN FULL EFFECT! THIS IS NOT A DRILL!!! pic.twitter.com/UuhSc0EjEd

@SavageXFenty shows are so diverse and always looks fun. @rihanna can literally do no wrong

this is the first body inclusivity for men i’ve ever seen https://t.co/8BH776qHWF

Do whatever you want to do with your body bro. You can nevver please everyone. If you wanna be buff/slim/chubby, it's all you bro

Man you deserve to feel this way. Brands never include people like us and when they do they do it for clout. Miss Riri is the first person to give a genuine shit about normal people with different body types.

And I was not ready

To see a bunch of people finding someone built like me really attractive.

So I'm having some feelings about this at the moment.