Those who have watched the Star Wars series remember the fight scene where Obi-Wan Kenobi battles it out with his student Anakin Skywalker for the Revenge of the Sith (Star Wars: Episode III). The High ground memes have always been making rounds but with the return of the Star Wars spin-off, we can't help but reminisce about it. The memes basically make fun of Obi-Wan's victory. Take a look at one of the High ground memes before reading all about it. 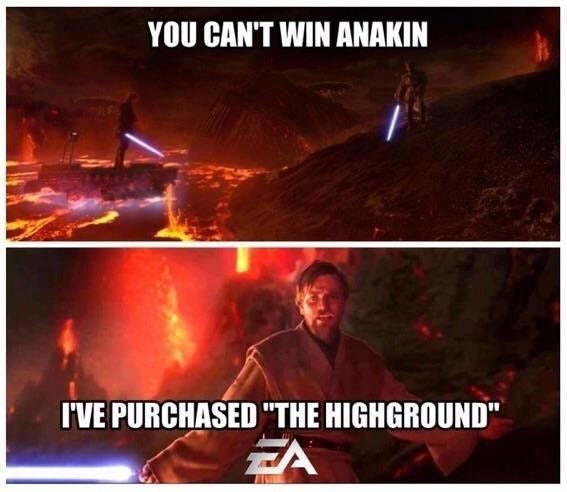 What is Obi-Wan's High Ground Meme? Is Disney attempting to change the High ground gag into something serious?

During the climax of the Star Wars prequels, Kenobi and Skywalker fight a gripping duel on the planet of Mustafar to wrap up the Revenge of the Sith. After many tactical and agile attacks by Obi-Wan, instead of giving an end to the fight, Obi-Wan attempts to make Skywalker surrender as he doesn't want to kill him while standing on higher ground. This led many fans left wondering on how 'a high ground' could make someone surrender during an epic lightsaber duel and many audiences considered it to be mere ridiculousness.

Recently, it seems like Disney is attempting to change the perception around the High ground meme which is evident in Disney+s  The Gunslinger episode of The Mandalorian TV series. The episode features a scene where Mando and a bounty hunter are being attacked by Fennec Shand. At this time, Mando comes up with a plan to attack Shand instead, but when his partner asks him about how sure he was about Shand's position? Mando replies that she won't leave the high ground.

Now, a second instance where the Star Wars franchise trying to put sense into their High Ground dialogue was evident during the video game titled Star Wars Jedi: Fallen Order. Here at one instance, one of the Stormtroopers on Kashyyyk very clearly and proudly enunciate that 'at least they have the high ground'.

ALSO READ| Star Wars: The Rise Of Skywalker Could Trigger Seizures On People With Epilepsy

American space web television series called The Mandalorian released on November 12, 2019, on Disney+ and instantly became the most in-demand series in the world. The character of Baby Yoda has gained a lot of popularity to an extent that the character could now be turned into an emoji. The Mandalorian series showcases the adventures of bounty hunter Dyn Jarren and is a part of the Star Wars universe. While the first season aired in November, the makers have already planned for a second season although Disney+ is not yet available in India.