Steve Martin recently took to his Twitter and shared a photo of himself having a fly on his head. The actor was mocking VP Mike Pence with the same -

While the first Presidential debate between Joe Biden and Donald Trump turned out to be a meme fest on the internet, the VP debate was no less. The current Vice President Mike Pence was speaking during the Vice-Presidential debate when a fly came up and loaded on his head and stayed there for nearly a minute before flying away. The fly landing on Mike Pence's head easily turned out to be talking point after the debate where a number of meme pages on social media platform took notice and trolled the VP. However, actor Steve Martin has given a Halloween costume spin-off to the Mike Pence fly incident -

Social media had promptly made the Mike Pence fly incident viral. Many social media accounts by the name of 'Pence's Fly' had also made their way. Whereas many celebrities had also made fun of the incident but Steve Martin is the first one to turn into a costume. Martin can be seen simply having a black dot on the top of his head as his Halloween costume. Another user by the name Robert Collins took in the reply section of Steve Martin's tweet writing that even his Halloween accessory had arrived in time along with a photo. The photo he shared consisted of a toy package titled 'Mike Pence's Head Fly Action Figure'. Check it out below - 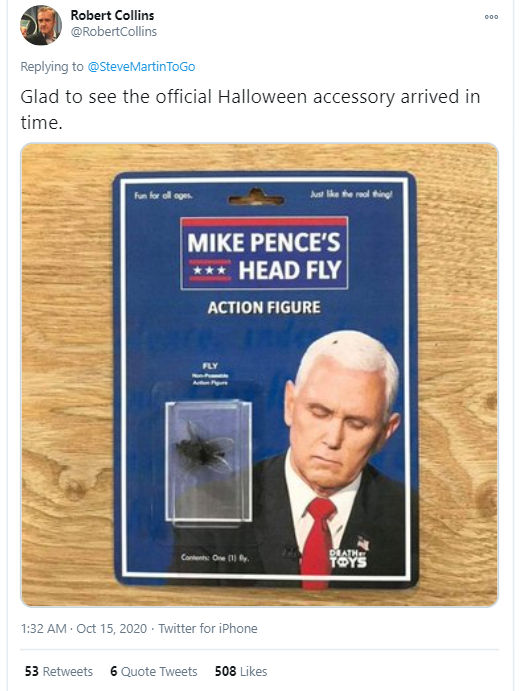 While celebrity making fun of an incident like this does not sound something out of the box, Presidential candidate Joe Biden also took his hand at mocking Mike Pence. Joe Biden had shared a photo of himself holding a fly swatter while posing in front of the camera. Along with the tweet, Joe Bident had written 'Pitch in $5 to help this campaign fly'. Check out the Presidential candidate post below -

On the other hand, Vice President candidate Kamala Harris had appeared at an interview with MSNBC where she was asked if she spotted the fly on Pence's head. She replied back just nodding her head in affirmation. She was also asked why she did not alert the current VP, but she answered saying that the interviewer should 'fly' away from the question jokingly.