'Swamp People' Season 12 Cast: All About The Alligator Hunters On The Reality Show

Swamp People season 12 cast: Take a look at the who comes back to the bayous in order to save the neighbourhood from increasing alligator population. 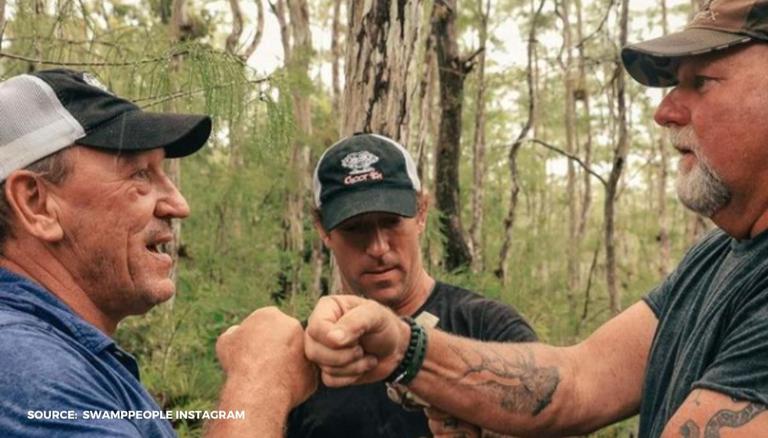 After a successful run for 11 seasons, Swamp People season 12 went on air this Thursday, February 4, on History channel. The show revolves around the day to day lives of Alligator hunters that are living in and around the swamps of Atchafalaya River Basin who hunt American alligators for survival. Read along to know more about the cast of Swamp People season 12.

Also Read: Who Is JoJo Siwa Dating? Internet Personality Comes Out Of The Closet In Insta Post

As the alligator population is exploding and inching closer to his home, Troy Landry aka The King of The Swamp has got himself a 100 tags this season. He is adding more people to his hunting crew and the new additions include his sons Jacob and Chase, nephew Holden along with friends Dusty Crum and swamp legend Terral Evans. His only mission for the season is to get the population of the alligators in check by catching as many as possible of them.

My Family !! And The Baby Bump pic.twitter.com/p5KoDA7Rww

Liz decided to give up hunting for several seasons to take care of her kids and raising them. However, the Alligator Queen is back in action. She is returning to the Bayou with stepson Destin, to hunt alligators along with her.

Bruce Mitchell had walked out of the show to run his family’s gator farm and spend some time with his grandkids. But he could not stay away for long, as frequent calls from scared neighbours at the bayou have brought him back in the action. Apart from fishing, Mitchell also takes care of invasive pythons at the Everglades.

Wheat comes from a long-line of gator wranglers, with her great-grandpa being one of the original hunters in St. Bernard Parish. Pickle has been hunting with her father since the time she started walking. Apart from being a hunter, she also assists her family business with duck and turkey calls.

It’s been a while!!! Gator season coming to a end, that’s a wrap!! pic.twitter.com/k45Z8cJDig

Daniel Edgar aka the Creole Patriarch is back in action with his helper and sharpshooter Big Tee. The duo will be seen moving towards the remote backwaters of the swamps and plan to get rid of the killing machines. Edgar is ready to do his part in controlling the gator population and will also be joined by his family members Dorien and Joey Edgar.