Filmmaker Tahira Kashyap who is known to voice her opinions on social media recently took to Instagram and compared her strong body to that of Kendall Jenner.

Filmmaker and writer Tahira Kashyap who is known to voice her opinions on social media recently took to Instagram and shared her thoughts on latest Skims photoshoot by United States popular model Kendall Jenner with sisters Kylie and Kardashian. Tahira posted a mirror selfie while drawing a comparison of her 'strong' body with Kendall. Tahira penned a lengthy post and also recalled a heroic deed when she had saved her daughter, pet dog and sister in the lift that had stopped working.

In the post, Tahira spoke about Kendall’s pictures from her photoshoot for sister Kim's shapewear company. In the picture, the supermodel can be seen wearing a red lingerie while flaunting her tiny waist. Tahira, who was stunned by Kendall's pictures, shared her thoughts on the same. In the post, she wrote, "Kendall and her tiny thong pictures are all over the internet, and like many women, I too wondered how is it freaking possible to look like that! The belly button is just a seductive slit or more like a kala tikka we put on kids and I don’t know how that tiny portion of cloth could hide her essentials esp down below". She added, "And so it was time to reflect (quite literally) and assess, more so judge, my reality."

Continuing, she wrote, "Hmmm what do I think about what I saw? Well, I saw this 69kg (every kilo matters) woman (out of which 4 Kendall's can be taken out) with strong limbs and bruises that she got yet by actually saving her puppy, her daughter, and didi by jumping in the lift as the sensors weren’t working and it was closing its doors on the 3 of them who were waiting for my son to join. I stood there like the rock of Gibraltar (or at least in my head) squeezing the door ajar with all the strength I had and had the 3 of them get out of the senseless and sensorless elevator’s way while quickly pulling myself in the lift with them. I felt quite heroic and grateful to this weight that I am trying to beat off, for had it not been for that, someone would have def gotten hurt! Grateful to you ass for quite literally saving all our asses. The moral of the story don’t wait for dysfunctional closed doors to open the way to love yourself a wee bit more."

Tahira’s post left many inspired. As soon as she dropped the picture on Instagram, many of her industry friends heaped praises on her. Her husband and actor Ayushmann Khaurrana was the first one to comment under the post and wrote, "Big fan!". Ekta Kapoor, Abhishek Kapoor, Aakriti Ahuja, and others took in awe of Tahira and the ways she expressed her feelings. Earlier, Kendall had shared pictures from Valentine’s Day photoshoot and wrote, "vday is coming. SKIMS BTS". 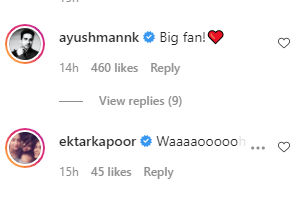