Here's 'Tesla' trailer review and the initial fan reaction to the Ethan Hawke starrer biopic film based on the life of Nikola Tesla. Read further to know more.

Ethan Hawke will be seen next in the film Tesla. The film is based on the life of scientist Nikola Tesla and will feature several key points in his career. People who have a passion for the subject are aware of “The War of Currents” between Nikola Tesla and Thomas Edison. The film is said to shed light upon this very aspect. Ethan Hawke will play the titular role in the film and fans are excited about it. Here is a review of the trailer along with some initial fan reactions:

Tesla trailer review and initial fan reactions to the biopic

As per the trailer of the film, the movie will touch upon various aspects of the inventor genius' life and thus unravel many interesting points. Fans expressed that they are thoroughly impressed by the trailer and cannot wait to see the film once it is out. The cast of the film includes Ethan Hawke as Nikola Tesla, Kyle MacLachlan as Thomas Edison, Eve Hewson as Anne Morgan, Jim Gaffigan as George Westinghouse, Hannah Gross as Mina Edison and Josh Hamilton as Robert Underwood Johnson, among many others.

Also Read | Remo D'Souza On Saroj Khan's Biopic: 'It's Too Early, However, It's My Dream Project'

Upon the trailer release, fans of the actor and the scientist immediately rushed to shower in some positive comments on the trailer. The fans were primarily delighted due to the trailer being released on the birthday of Nikola Tesla. Fans even suggested that perhaps Ethan Hawke may go on to get an Oscar for his role as they found the trailer quite intense. Fans praised the trailer and also praised the premise of the film. However, fans hoped that the film focuses more on the achievements of Nikola Tesla along with the war on currents, instead of his romantic relationships. Fans expressed that they are indeed excited to watch the film. 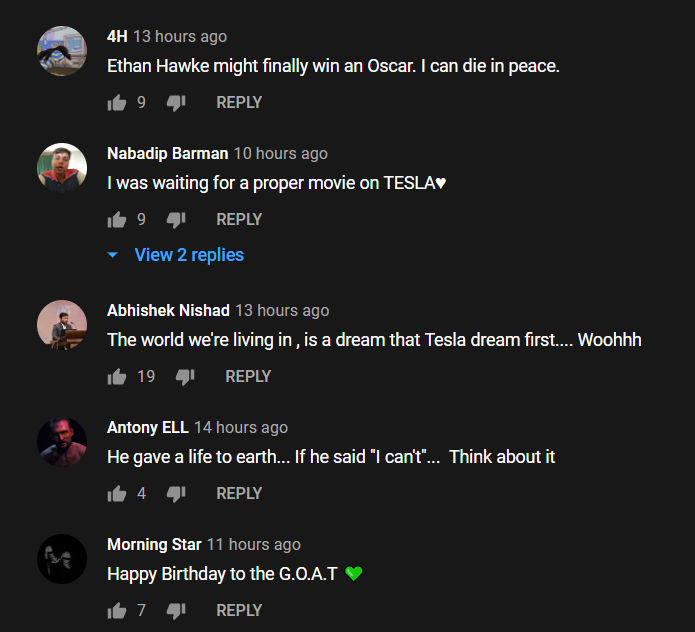