Tom Felton Uses The Official Hogwarts Sorting Hat, Does Not Get Into House Slytherin

Tom Felton took to his Instagram account and revealed that he used the Official Hogwarts Sorting Hat and did not get into house Slytherin. Get more details.

Tom Felton spent ten years playing the role of Draco Malfoy in the Harry Potter series. Draco Malfoy was the bad boy from house Slytherin and was often seen rocking the green coloured cloak of the house. However, when it came to choosing a house for him, the Hogwarts Sorting Hat put him in Hufflepuff.

Tom Felton shared a series of pictures from the Hogwarts Sorting Hat app. What impressed the audience as well as his Harry Potter co-star Evanna Lynch who played Luna Lovegood in the movies was the fact that he put his name as Draco Malfoy for the Hogwarts Sorting Hat. Tom Felton took to his Instagram account and while posting the pictures from the app mentioned that it was, ‘a sad day....on so many levels #harrypotterathome.’ [sic]

ALSO READ: Emma Watson Shares A Picture With Tom Felton And Other Harry Potter Cast And It's MAGIC 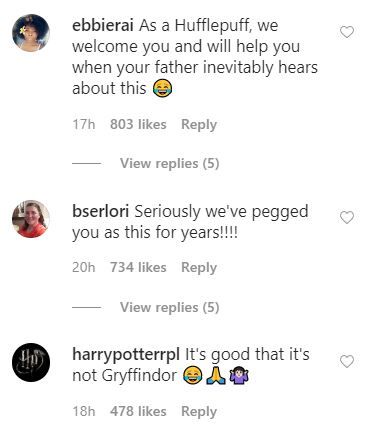 Harry Potter fans, fondly known as Potterheads went gaga over the pictures shared by Tom Felton. Many stated that they always knew that Malfoy belonged to Hufflepuff. While some welcomed him to the house Hufflepuff. Some also stated that it’s a good thing that the hat did not put him in Gryffindor as that would’ve defied the whole purpose of the movies.

ALSO READ: How Tom Felton,Jason Momoa And Others Spent Their Weekend?

Despite having a vast cast for the film, the cast of Harry Potter have been very vocal about staying friends even after the shooting of the film has wrapped up. The Harry Potter cast members are often seen as having a mini-reunion. Most recently, Emma Watson (Hermione Granger), Tom Felton (Draco Malfoy), Evanna Lynch (Luna Lovegood), Bonnie Wright (Ginny Weasley) and Matt Lewis (Neville Longbottom) all got together to celebrate Christmas together. Emma Watson who played the role of Hermoine Granger is often seen meeting up with Tom Felton.

PEOPLE HAVE PLEDGED SO FAR
LATEST NEWS
View all
13 hours ago
Lili Reinhart, Lily Singh, Ellen DeGeneres and others who have made their sexuality public
12 hours ago
Hasan Minhaj's anti-racism video praised online, netizens call it 'most powerful message'
10 hours ago
When 'Twilight' star Taylor Lautner was almost replaced in 'New Moon'
11 hours ago
'Riverdale' writer apologises to Vanessa Morgan after her 'diversity' comment; Read here
12 hours ago
'Tiger King' Joe Exotic requests pardon, says he is being ill-treated in prison; Read here