Tom Hanks' One Week Of Self-isolation Brings A Good And A Bad News; Details Here

Tom Hanks shares a good news and a bad news with his fans. Read on to know more about what happened with Hanx in the first week of isolation due to COVID-19.

Tom Hanks and wife Rita Wilson were tested positive for the coronavirus or COVID-19 and were hospitalised. Later the Hollywood celebrity couple got discharged from the hospital and were moved to self-quarantine in their Australia home. Now, the Forrest Gump actor has opened up about his current statue. Read more to know about what Tom Hanks has to say amidst the COVID-19 outbreak:

Self-isolation week one of Tom Hanks goes without fever

Tom Hanks took to his social media handle to inform his fans about his and his wife Rita Wilson's current health statues after being hit by the coronavirus. He posted a photo on his official Twitter handle and stated that he has the blahs but not the fever. Hanx stated that he has good news for his friends. It is that after spending one week in self-isolation, the symptoms of coronavirus are still the same but he has no fever now.

Thanks to the Helpers. Let’s take care of ourselves and each other. Hanx pic.twitter.com/09gCdvzGcO

In self-isolation, he is doing the dishes and folding the laundry, which leads to a good nap on the couch. But he also had a piece of bad news. His wife has defeated him six times straight in a row, at the game of Gin Rummy. She is leading by 201 points. Tom Hanks has also stated that he has taken along with him his typewriter that he once used to love. The actor then said that we all are in this together. Spreading good vibes everywhere. 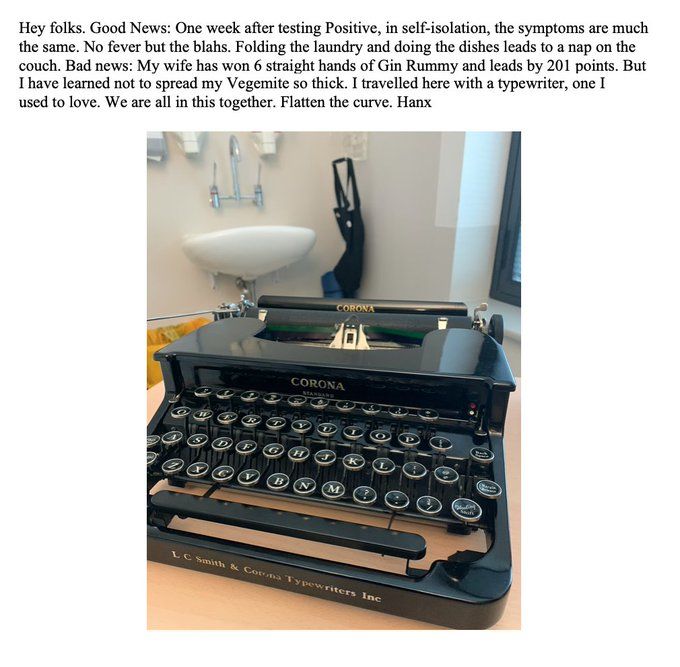 The only thing more dangerous than the front lines was the fight to get there. Screenplay by @TomHanks inspired by actual events, @GreyhoundMovie comes to theaters June 12. pic.twitter.com/sequ282SHx

Another good news for the fans of Tom Hanks is that he will be soon seen in a war drama titled Greyhound. It is slated to be released on June 12, 2020. Greyhound will feature Tom Hanks in the role of Commander Ernest Krause. It will revolve around the days of the US Army during World War II.