VMA 2020 Highlights: From Lady Gaga To BTS, The Best Moments Of The Aug 30 Ceremony 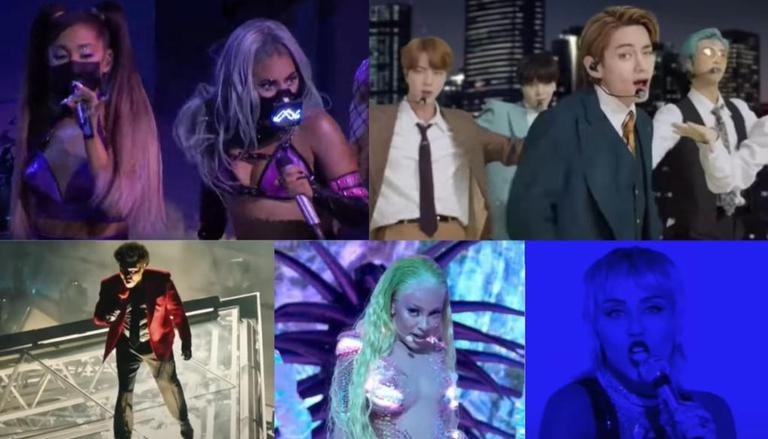 The MTV Video Music Awards ceremony, which is popularly known as VMAs, was held at New York City at locations scattered across its five boroughs. Due to the pandemic, the event was conducted outdoors on August 30th, 2020 at 8 pm EST. The show was dedicated to Black Panther star Chadwick Boseman who passed away at the age of 43 two days before the awards ceremony.

Tonight's #VMAs is dedicated to him.

The Weeknd opened the VMAs 2020 with his song Blinding Lights. He performed at Edge observation deck at Hudson Yards. Later he was awarded the Video of the Year and Best R&B Video awards for his song Blinding Lights. The Weeknd accepted the awarded by stating that it was a difficult time for him to celebrate as he awaits the justice for Jacob Blake and Breonna Taylor.

BTS, the popular Korean boy band group, became the first-ever K-pop group to perform at the VMAs. They performed remotely at a location in South Korea where they sang their first-ever all-English single Dynamite. BTS later received 4 awards at the VMAs this year including Best Pop and Best Group awards.

ALSO READ| Stars Attending VMA 2020: Who Is Presenting? Who Is Performing? Check Out The List Here

Lady Gaga & Ariana Grande starred the VMAs this year after receiving 9 nominations each. They both performed on their song Rain on Me, the song won them the best collaboration award as well. later Lady Gaga received the first-ever Tricon award as well.

Taylor Swift accepted the award for Best Direction for her song The Man. She also thanked her fans for the love she received for her eighth album titled Folklore last month as well. MTV News Twitter shared a glimpse of her acceptance speech for The Man.

.@taylorswift13 just won Best Direction for her #TheMan music video at the 2020 #VMAs! After surprise dropping her eighth album #Folklore last month, she thanked Swifties for everything they've done for her this summer ❤️ pic.twitter.com/uSL9b01tYS

Some other notable VMA highlights of 2020 included Maluma's performance of the song Hawai. He performed the song in Brooklyn. Miley Cyrus also performed on her version of the Midnight Sky at the VMAs 2020. DaBaby performed a medley of the songs Peephole, Blind, and Rockstar along with original America’s Best Dance Crew champs named Jabbawockeez.

ALSO READ| From Beyonce's Pregnancy To Taylor's Breakup, Here Are The Most Iconic VMA Reveals