Are Joyner Lucas And Ashanti Together? Fans Speculate After Their Chemistry In Fall Slowly

Joyner Lucas and Ashanti's 'Fall Slowly' has fans convinced that the two artists are romantically involved. Have a look at the details with the video here. 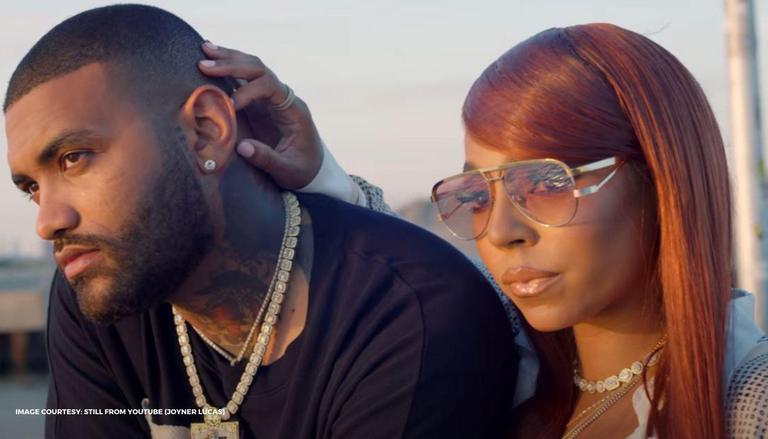 Joyner Lucas and Ashanti’s collaborative piece, Fall Slowly, has left the audience convinced that the two artists are together in real life. The video showcases an on-off relationship between the two musicians and their authentic acting has triggered the instincts of their fans. A number of people have taken to social media to put forth their doubts about Joyner Lucas and Ashanti’s relationship. However, there has been no confirmation about them being romantically involved with each other.

Are Joyner Lucas and Ashanti dating?

Joyner Lucas and Ashanti’s latest song, Fall Slowly, from the album Evolution has been the talk of the town ever since it released on Wednesday. The song features a love story between two aggressive people who are so in love but are not the right ones for each other. They have a volatile relationship that brings out their worst side. However, they find it difficult to stay away from each other due to their strong attachment.

One of the scenes in the catchy music video features Joyner Lucas and Ashanti sharing a sweet and passionate kiss. This scene has led fans to believe that the two artists are most probably dating each other in real life as well. The chemistry in every intimate scene is clearly visible and fans can barely keep calm about it.

Few of the fans have been of the stance that the two musicians are just acting and there is nothing real between them. However, the majority of the viewers stand stern on their opinion that the two artists are completely smitten by each other. Have a look at a few of the reactions on Twitter here.

Ashanti and Joyner were kissing hella hard. They got to be dating or just good at acting 😭

@JoynerLucas x @ashanti killed that track and the visual 💎💎💎 #FallSlowly

Ooooh acting or nah? I like @ashanti and @joynerlucas as a thing✨ Go watch the video cuz that was a kiss kiss 😹😹😹 It’s called #FallSlowly #joynerlucas #ashanti https://t.co/F64QQpCQYQ

Listen the visuals for #FallSlowly were everything and the chemistry between @ashanti & @JoynerLucas was beyond hot 🥵 I feel like we need a follow up. This is a very real depiction of a relationship that can be extremely passionate but toxic

Those kissing scenes look a lil spicy. We see you Ashanti #fallslowly pic.twitter.com/psvhxSK5N2

Also read Adele Sends A Surprise DM To A Fan; Says 'Absolutely Chuffed You Like My Music'

The song Fall Slowly is the lead single from Joyner Lucas’ latest album, Evolution. The song speaks about different stages of a relationship and how people are bound to change with time. The song has a soothing and heartfelt melody which makes it a hit amongst the fans. The lyrics have also been tagged as relatable and understandable, which is another winning element of this piece. Have a look at the original video on YouTube here.

Also read Little Mix Turn Sunny Side Up Amidst This Pandemic With Holiday Music Video, Watch