Ariana Grande and Justin Bieber's single Stuck with U was accused of cheating by rapper 6ix9ine. The artists now defend their song rubbing the rapper's claims

Ariana Grande and Justin Bieber collaborated for a charity single, Stuck with U. It was released on May 8, 2020, and debuted atop the Billboard Hot 100. After the song's success, rapper 6ix9ine accused the artists of cheating, saying that they bought the number one spot. 6ix9ine’s track Gooba, which was out on the same date was at the third spot. Now Grande and Justin defended themselves, rubbishing the rapper’s claim. Read to know more.

Ariana Grande has recently shared a long post on her social media handles. She firstly thanked fans for the success of the track. Then she talked about the allegations made by 6ix9ine.

Her caption read, “thank u to everybody who supported this song, this cause and made this happen. we love uuuuu so much. ðŸ¤ there’s so much to celebrate today. ðŸ¤ however, i would like to say a few things. anyone who knows me or has followed me for a while knows that numbers aren’t the driving force in anything i do. i’m grateful to sing. grateful to have people who want to listen. grateful to even be here at all. i didn’t have a number one for the first five years of my career and it didn’t upset me at all because from the bottom of my heart, music is everything to me. my fans are everything to me. i promise i couldn’t ask for another f**king thing. so with this celebration today, i would like to address a few things which i don’t usually do (i don’t give my energy to drama or strange accusations normally but this has gone a little too far)...my fans bought the song. JUSTIN’S fans bought the song. OUR fans bought this song (never more than four copies each, AS THE RULES STATE). they are ride or die motherf**kers and i thank god every day that i have them in my life. not just when they fight for us to win (even when i ask them not to as i did this week) but because they’re some of the greatest people i know. sales count for more than streams. u can not discredit this as hard as u try. to anybody that is displeased with their placement on the chart this week or who is spending their time racking their brain thinking of as many ways as they can to discredit hardworking women (and only the women for some reason.....), i ask u to take a moment to humble yourself. be grateful you’re even here. that people want to listen to u at all. it’s a blessed position to be in. i’ve had a lot of “almost number ones” in my career and i never said a goddamn thing because I FEEL GRATEFUL TO EVEN BE HERE. TO WANT TO BE HEARD AT ALL .... and you should feel that way too. congratulations to all my talented ass peers in the top ten this week. even number 3. ðŸ¥° and thank u to @billboard for this honor. and thank u to everybody who helped us raise a lot of money for a very important cause this week. love u all a lot."

On the other hand, Justin Bieber addressed the issue on his Instagram story. He shared a note in which the artist mentioned to not discredit their fan base with false information. As 6ix9ine largely accused Ariana Grande, Bieber came to her defence saying that his name should also be taken as it is their song. Take a look at his note. 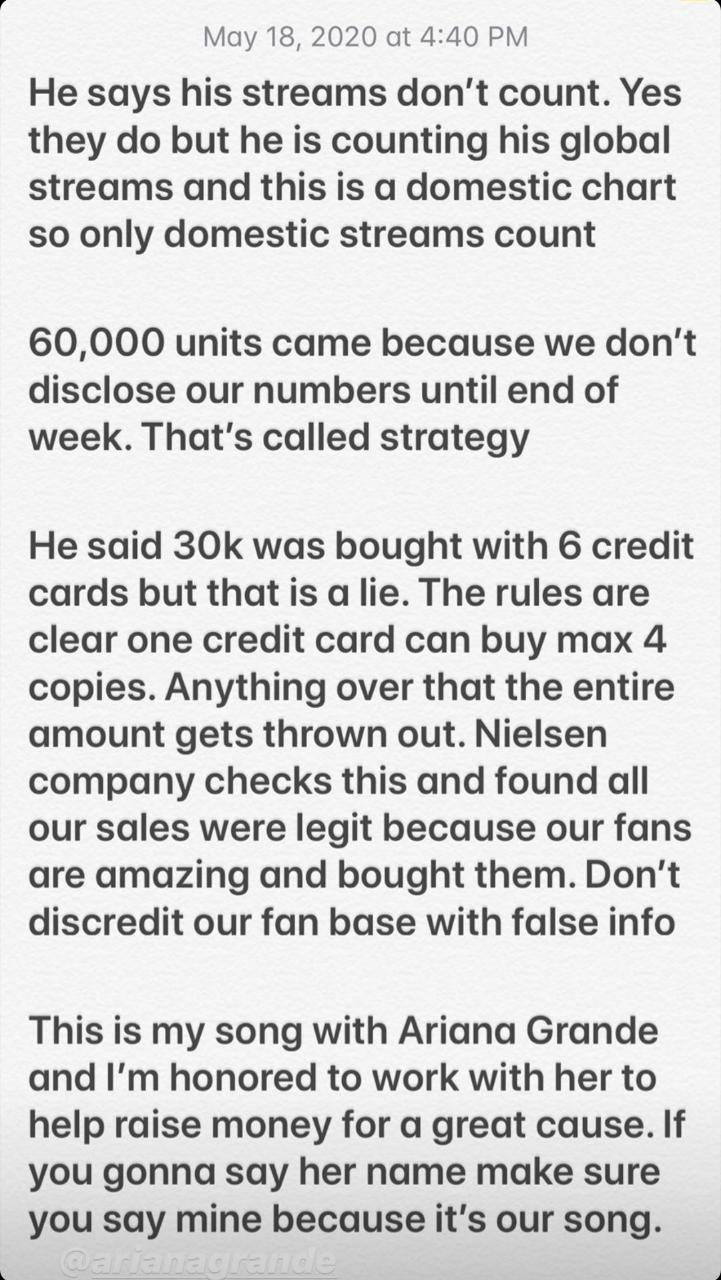 The feud started when 6ix9ine, in a video, told his followers that the Stuck with U singers have purchased half units of the songs' sold units. He mentioned that they did it by using six credit cards and when his team asked Billboard they refused to disclose the information. The rapper stated that “this is what these artists do. And It’s not fair.” Check out his video below.

Also Read | Ariana Grande And Justin Bieber At Odds Over Their Song 'Stuck With U'?

Stuck with U marks the third time when Ariana Grande and Justin Bieber debuted at number one on the chart. With that, they created a history of having three number debut songs on the Hot 100 and joined Mariah Carey and Drake. All net proceeds from the track will be donated to the "First Responders Children's Foundation." The amount will fund scholarships of children of frontline workers whose lives have been affected by the coronavirus or COVID-19 pandemic.