Ariana Grande met BTS at the rehearsals of Grammys 2020. She shared the meet-up picture without Yoongi in it. Here are some hilarious fan reactions.

Ariana Grande met BTS at the rehearsals of Grammys 2020. Ariana shared a picture on January 23rd, 2020 and Twitteratis lost their calm. She was seen posing in a black and white picture alongside six members of BTS-RM, J-Hope, Jin, V, Jimin and Jungkook. Fans were curious to know where Min Yoongi, also known as Suga, was.

It is confirmed according to official reports that Ariana Grande and BTS both will be performing at the next edition of Grammys. However, the focus of fans was, where rapper Suga or Yoongi was. Twitter saw #WHEREISYOONGI in worldwide trends after fans start asking several questions related to the picture. 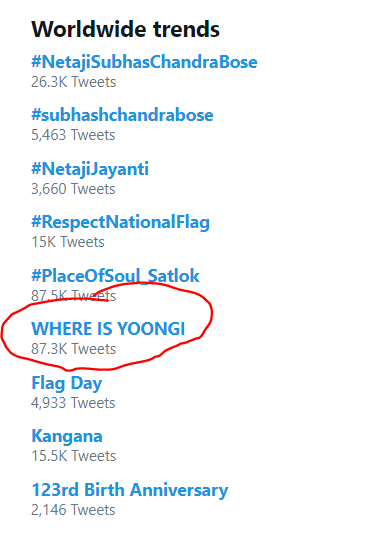 Here is what Ariana Grande shared:

look who i bumped into at rehearsal :) pic.twitter.com/7VUjB3CMLX

Fans had questions regarding BTS and Ariana Grande posing together without Yoongi:

Ariana: look who i bumped into at rehearsal :)

ARMY's: WHERE IS YOONGI!?

Some ARMY made this, sorry I don't know who, jist found it on weverse 😂😂
But
WHERE IS YOONGI trending made my day 😂😂 #WhereIsYoongi

*YOONGI DOESNT SHOW UP ON ONE PIC*

EVERYONE: “WHERE IS YOONGI”
pic.twitter.com/rakE81r1An

yoongi in the back doing his mots 7 review:

Yoongi is saving the world pic.twitter.com/ajVDpzRStz