Billie Eilish Posts Warning Note About 'scam On Snapchat', Says 'It Is Not Me, I Promise'

Billie Eilish's online presence has always made headlines. The singer actively posts about her life happenings. Recently, she warned her fans about a scam

Billie Eilish, on March 30, 2020, posted a warning on her Instagram story where she talked about people who are misusing Billie Eilish's Snapchat presence and talking to her fans. In this message, she posted a clarification about not using her Snapchat account to talk to anyone. The singer made it clear that she promises to her fans that she is not the one talking to them and no matter what these people say to convince anyone to talk, it’s not her who is talking to them. Billie Eilish also apologised to people who were scammed by these people on Snapchat. 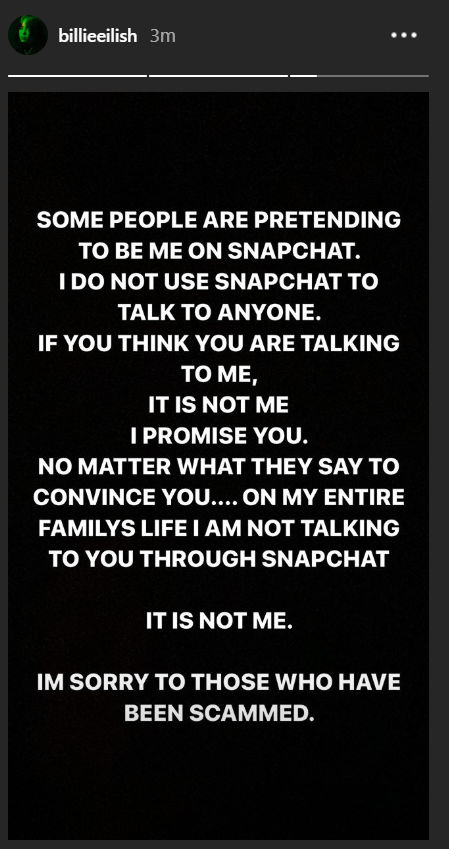 Several celebrities have been sharing awareness on their social media handles about the growing concerns across the globe as coronavirus continues to spread all over. Recently, singer Billie Eilish took to Instagram to share awareness about the same. She told fans not to panic. The singer shared a video on her Instagram story where she said that the virus is a big deal and it is not to be taken as a joke. She also said that many people haven’t seen the virus nor the people suffering from it therefore it is hard to understand the seriousness of the issue. She said that she has seen a lot of youngsters all around the world roaming carefree, partying, having fun, and added that they are being irresponsible.

Also Read| Billie Eilish's brother Finneas O'Connell: All you need to know about the young star

Billie talks about the coronavirus on her Instagram stories pic.twitter.com/TAwRPRfaAD

After spreading awareness about COVID– 19, Billie Eilish made the announcement saying that her Where Do We Go Tour in North America stands postponed. She also said that the North American tour dates are being rescheduled & will be announced. Also, the tickets that were booked by fans “will be honoured for the new tour dates.”

Following last week’s announcement and in light of the ongoing CDC restrictions and guidelines, all of Billie's remaining ‘WHERE DO WE GO’ North American tour dates are actively being rescheduled & will be announced soon. All tickets will be honored for the new tour dates. (1/5)