Blackpink's Rose celebrates her 25th birthday on February 11. Fans of the singer went on to Twitter to wish her and also trend #AllourloveRoseDay.

K-pop band Blackpink's Rose is celebrating her 25th birthday today. The singer took to her Instagram to share a monochrome picture of herself with a cake. She is seen sitting on the floor in front of a couch while holding a rectangular shape cake. She captioned the picture as "Officially 25!!!!!!!". The comment section is filled with her fans wishing her. She also mentioned in the caption that she will go live on Vlive, an app that connects the singers to their fans. Check it out. 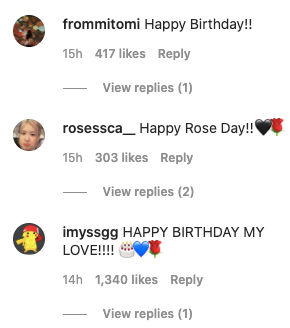 Her fans on Twitter went on to trend the hashtag #AllOurLoveROSÉDay and uploaded pictures of her with the caption "Happy Rose Day". New Zealand born South Korean singer is quite famous among her fans. She has over 35 million followers on Instagram. Check out how her fans on Twitter wished her.

Also Read: When BLACKPINK's Lisa joked about eating Rose for her survival and left her startled

In January, Rose performed her debut song Gone in Blackpink's virtual concert 'The Show'. On January 25, the Twitter account of Blackpink released a teaser of Rose's single. The 34-second teaser shows Rose lying down in the bathroom and then it pans out to her sitting on a dining table. In the background, there are lyrics playing from her song, Gone. The video has over 38 million views. The band's label YG Entertainment, earlier announced that the girls will be focusing on their solo projects. Check out the tweet of Rose - Coming soon teaser.

Get a first preview of #ROSÉ’s solo project at 2021 #BLACKPINK: THE SHOW!ðŸ–¤ðŸ’–
Don’t forget to join membership and watch THE SHOW!
ðŸŽ¬https://t.co/8ZFxXdUIam

Earlier, Rose took to her Instagram to share a picture where she was seen holding a guitar. The singer was sitting in a swing and uploaded three monochrome pictures. The caption of the picture reads, "Gone", which is also her first solo song. Check it out.

Blackpink has had a fruitful year, they collaborated with various International singers as well. The band worked with Selena Gomez to release the song Icecream. They also worked with Lady Gaga to release the song, Sour Candy. The music video of their collaboration with Selena was released on August 28, 2020. The video has over 496 million views on YouTube. Check it out.