Bon Jovi took to Instagram on Wednesday, to unveil the poster of his upcoming song, Do What You Can which also features Jennifer Nettles. Read

Bon Jovi took to Instagram on Wednesday, September 16, 2020, to unveil the poster of his upcoming song, Do What You Can. The band will be once again collaborating with Me Without You singer Jennifer Nettles. Fans have gone all out to comment on all things nice on the post. In the poster, the top left side shows Bon Jovi looking at suave as she sports a vest and a black jacket. He also completes his look with a messy hairdo and aviators.

One can notice the skyscrapers behind him. And on the bottom right corner, one can see Jennifer out in the open enjoying herself. She can be seen sporting a black top along with a pair of joggers. She completed the look with a pair of sneakers and a wavy hairdo. One can also read the title song and artist names on the poster. Along with the poster, Bon Jovi also wrote, “Well, the cat’s out of the bag! I have a brand-new duet coming out this Friday with @BonJovi! Pre-save “Do What You Can” now”. Take a look at the post below.

Seeing this post, fans could not stop gushing over how excited they were and went all gaga in the comment sections. The post received several likes and comments from fans. Some of the users went on to comment saying that they have already pre-saved the song and can’t wait for the release. While some went on to praise the artists. One of the users wrote, “I CAN'T WAIT FOR THE NEW ALBUM ðŸ¤©ðŸ¤©ðŸ¤© and this new version of Do What You Can will be so great!” while the other one wrote, “DAMNNN can't wait! also, it was a phenomenal mix”. Take a look at a few comments below. 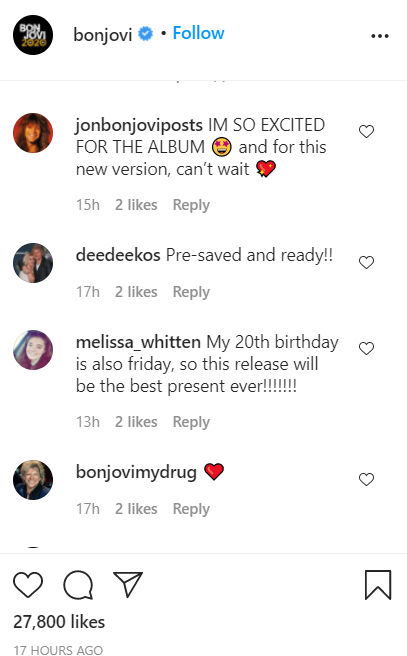 More about the song

Bon Jovi will once again team up with Jennifer Nettles for a new version of the COVID frontline tribute single titled, “Do What You Can”. The band had first announced the news on Tuesday. The new song “Do What You Can” will be released on Friday, September 18, 2020. Singers Bon Jovi and Jennifer Nettles previously collaborated on an alternate version of the album titled, “Who Says You Can't Go Home,” that released in 2006.

Also read | Masked Singer Season 4: Here Are The Costumes From The Show This Season