Britney Spears has claimed that she has completed a 100-meter dash and has a 4-second lead on record holder Usain Bolt's time. Read further to know.

Britney Spears took to her Instagram account recently to share her sprint time of 5.97 seconds. She also claimed that this makes her faster than Usain Bolt who currently holds the record for completing the 100-meter dash in 9.58 seconds. The 38-year-old pop star took to Instagram to share her sprint time with her followers on the social media app.

In the caption of the now-deleted post, Britney Spears mentioned that she ran in five seconds for the first time. She then continued the caption by saying that one needs to get over their worries and aim for pushing forward in life. The singer was amazed and happy about completing her run in five seconds. She added that usually she runs in 6-7 but now she is far ahead of where she was. Britney Spears seemed quite happy about her progress and shared a whole bunch of emoji at the end of the caption. 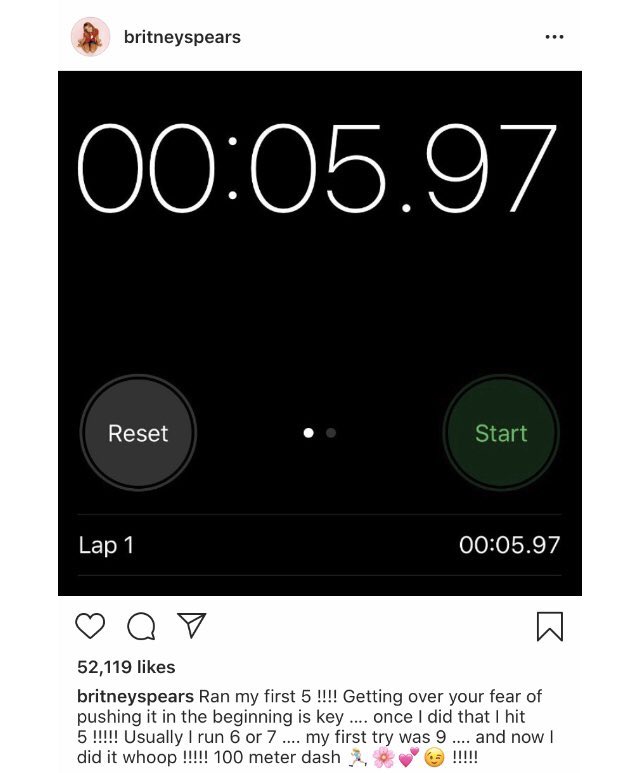 The singer posted her lap time as a picture post on Instagram to show her success. Many fans were seemingly shocked by this claim made by Britney Spears. The time difference between the world record held by Usain Bolt is that of 9.58 seconds while Britney’s is of 5.97, which is roughly a 4-second huge lead. This made some fans marvel at the singer while some questioned the authenticity of this claim made by Britney Spears.

However, Britney is considered to be one of the fittest stars. She is often seen posting rigorous workouts and routines. The singer is known to share her progress with her fans and she usually posts her progress to keep her fans updated. However, in a recent post, Britney Spears cleared the confusion about the 5-second race when she revealed that she was “obviously” joking about the lap time. She then mentioned that Usain Bolt has the world record currently, but she herself too is soon coming for the world record eventually.