BTS Jimin’s pose in the DYNAMITE teaser has caught the attention of fans as they call him ‘disco king’. Watch the teaser which has ruled over worldwide trends.

BTS Jimin made fans swoon after his striking pose in the DYNAMITE video teaser. The singer and the main dancer of BTS took over worldwide trends with #JIMIN and #ParkJimin trending in countries like South Korea, Saudi Arabia, Singapore, India, Malaysia and more. BTS Jimin’s dance steps, outfits and the DYNAMITE teaser itself was at the helm of all trends. BTS’ DYNAMITE is reportedly a full English song by BTS to release soon.

Jimin's pose in BTS DYNAMITE teaser which caught all the attention 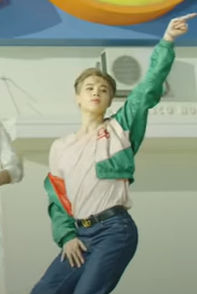 In the trailer, all the seven members of the group that is Jin, Suga, J-Hope, RM, Jimin, V and youngest member Jungkook are seen dressed up in retro outfits. Talking about Jimin’s look in the teaser, fans were quick to notice that he was wearing an all Gucci attire. However, what made up to the international trends was his disco pose in the trailer. His pose was strikingly similar to John Travolta's, noted fans. BTS Jimin was even compared to legendary pop icon Michael Jackson by fans.

LEGENDS OF THEIR ERAS ✨☺

DYNAMITE mv by BTS is everything retro

The 29-second video teaser of BTS’ DYNAMITE is set in a disco backdrop as signified by the giant ‘Disco’ billboard in the backdrop. The remaining members of the group are also showcasing their disco best in the short video., The video has raised expectations by fans as per several social media posts. BTS Jimin’s dance steps and a blink and miss close-up shot establishes well on the disco theme in the much-awaited track. The group will be releasing the song on August 21 on all streaming platforms.

Reply/quote with both keywords and your thoughts on Jimin for the teaser to keep them trending!! #JIMIN @BTS_twt pic.twitter.com/meDUrXrbx1

Fans are waiting for DYNAMITE mv by BTS as it will be a first English single by the full group. Before this, RM and Jeon Jungkook had voiced the track Waste It on Me feat Steve Aoki, which was entirely in English. The soon to be released track DYNAMITE will have several aesthetic revisits by the group as per reports.