BTS' V's new hairstyle was recently showcased by the pop artist through a tweet that ended up breaking records and exciting fans. Check it out below.

BTS has been gearing up for its comeback album for a while now, with their Dynamite single ready to drop on August 21, 2020. With the latest album, BTS septet is also expected to debut their new looks, as seen before with the previous release of their albums.

The boy band has grown as synonymous with its style, as it has been with the music. Now, when BTS member V aka Kim Taehyung revealed his latest mullet hairstyle, it left ARMY members gasping for air as they flooded the social media complementing the new look.

While some drew comparisons of V with a Disney Prince, others deemed the look to be powerful. Check out what fans are saying below -

the disney prince wish they were kim taehyung. pic.twitter.com/HDxNU9W7sS

the hair, the forehead, the eyebrows, the whole kim taehyung??!?!?! POWERFUL pic.twitter.com/gSXsXNFlQn

imagine this kim taehyung as your professor pic.twitter.com/RA8H0a5a8o

Also read: Lizzo gets called out for comments against BTS & One Direction, fans divided on Twitter

Taehyung had taken to his Twitter to showcase his new look where he ended up creating a social media record. The tweet shared by V received one million retweets within 24 hours it was posted, making it the fastest record for an artist on Twitter. Whereas, he also became the fastest artist to get 2 million likes on Twitter within 10 hours since the selfies were posted. 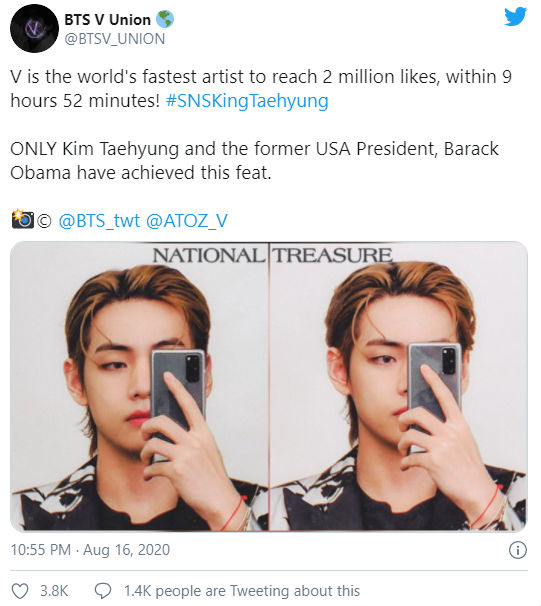 Recently, Taehyung has made a few appearances sporting his new hairstyle. Recently, BTS appeared to deliver a virtual winning speech at the Best K-Music Awards, whereas, the boyband has also introduced a new ARMY membership opportunity for fans which gives them better access to what the group is up to, V also appeared to greet the fans while talking about the new membership. V also made the headlines when he revealed that a mixtape has been under the works for him.

On the other hand, BTS recently revealed the first look for their upcoming single Dynamite. The band will be performing the single at the VMAs this year-round, which will mark their first-ever performance at the US-based award ceremony. The septet has been nominated for three awards including, Best Pop, Best K-pop, and Best Choreography. The band has been keeping their fans hooked with one appearance after other as they will also be seen performing at the Soul: ON:E concert in October 2020.

Also read: 'BTS Map Of The Soul ON:E' concert to be held online and offline in October