Guru Randhawa recently posted a picture with Yo Yo Honey Singh from his sister's engagement last night. Check out the photo and read to know more details.

Guru Randhawa and Yo Yo Honey Singh are among the popular artists in India. Honey Singh’s family includes Sneha Singh, who is the singer’s younger sister. She recently got engaged in a close-knit ceremony and Guru Randhawa was invited. He shared a picture from the event.

Yo Yo Honey Singh has also been quite active on Instagram where he has more than six million followers. He shared a couple of videos from his sister’s engagement that took place last night. Honey Singh first posted a video from the stage where a music event is going on and everyone seems to be enjoying it. The second video is from the ring ceremony. In it, his future brother-in-law is purposing his sister.

A post shared by Yo Yo Honey Singh (@yoyohoneysingh)

A post shared by Yo Yo Honey Singh (@yoyohoneysingh)

Also Read | Amid Farmers' Protests, Yo Yo Honey Singh Postpones Song Release 'with Due Respect'

Singer, composer and lyricist, Millind Gaba also attended Honey Singh’s family function. He was seen dancing in the video shared by Yo Yo. Later, he posted a picture from the event on his Instagram handle where he has more than four million followers. Millind gave his blessings to Honey Singh’s sister for a brighter future. 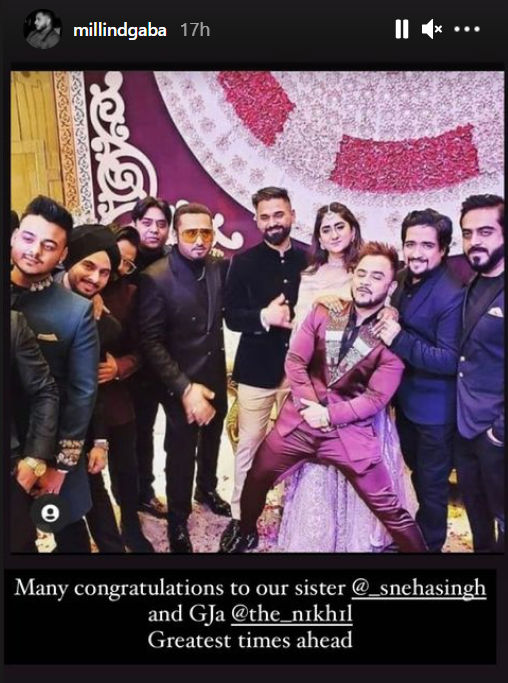 Also Read | Loved Honey Singh's Song 'First Kiss'? Here's What Else Should Be On Your Playlist

Yo Yo Honey Singh is making a return in the industry after a long halt. In a span of a month, he has released two songs titled, First Kiss and Jingle Bell. The former track has already crossed 100 million views on YouTube with two million likes, while the latter has more than 30 million views with one million likes. Honey Singh will soon be releasing a new song said to be named Saiyaan, along with Neha Kakkar.