Billie Eilish revealed about her being a Justin Beiber fan since her childhood. This time Justin Bieber surprised her by wearing her own merchandise.

The American singer Billie Eilish has always been open about her being a big fan of the pop singer Justin Bieber. She also shared different snaps and videos from her childhood days when she used to madly crush over Justin Bieber. Recently, she had a major fangirl moment when Justin Bieber along with wife Hailey Baldwin posted a picture wearing her exclusive merchandise.

Justin Beiber posted an adorable selfie of the duo where the two are seen donning the exclusive Billie Eilish merchandise. While Justin Bieber wore a white pull-over with a graffiti style text graphic of Billie’s full name, Hailey Baldwin went for red as she rocked a red pullover with Eilish’s recognisable stick man logo. In the caption, Justin Beiber mentioned Billie and wrote, "Our Fav".

As soon as the singer posted the picture, Billie Eilish went on to post a surprising reaction to it as she wrote, “OMG”. The comment on the singer’s picture garnered more than 84K likes and 2K comments. Billie Eilish made it more evident that she can’t get over it as she shared the picture on her Instagram story later. 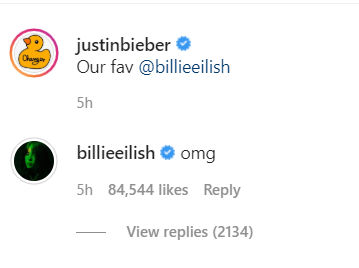 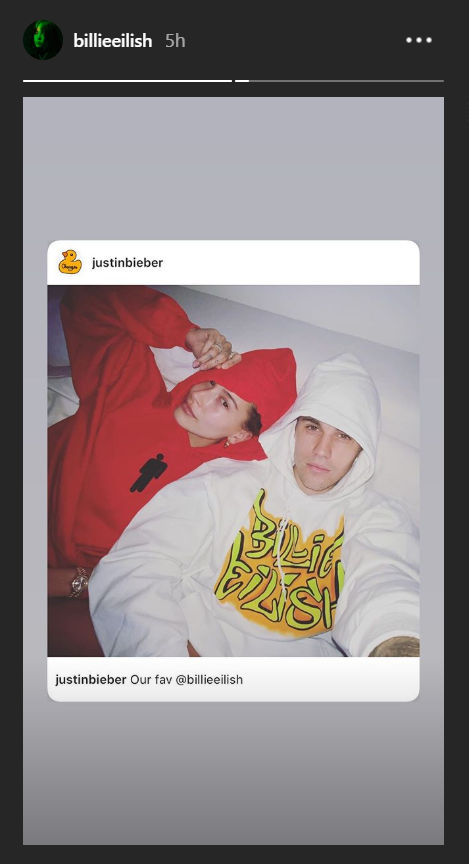 Billie Eilish's first-ever interaction with Justin Beiber was when he followed her back on Instagram. The pop singer also sent her a screenshot which was actually a message by Billie which she had sent in 2014. Their more personal interaction was at Coachella in 2019. The singer did not realise that she was standing next to Justin Bieber at Coachella.

Bieber in an old interview had said that he relates to her journey as he was also discovered at just 13 years old and Eilish released her debut hit at 14. The two have also collaborated for a song titled Bad Guy( remix).

PEOPLE HAVE PLEDGED SO FAR
LATEST NEWS
View all
1 day ago
BTS' Jeon Jung Kook melts fans' heart with his Festa 2020 song 'Still WIth You'
7 hours ago
CarryMinati releases new rap song 'Yalgaar' hitting back at trolls: Watch
22 hours ago
Did Jin leave BTS? Why has his picture been removed from Google search?
5 hours ago
Sunny Leone shares a moment of pride as daughter Nisha Weber tries horse-riding
23 hours ago
Which is Taylor Swift's favourite song? How did she learn guitar? What did she first play?