Neeti Mohan Performs Pilates As 'Mommy To Be In Full Form', Receives Love From Celebs

Neeti Mohan showed her baby bump for the first time on social media, performing Pilates as 'Mommy to be in Full form' and receiving love from celebs.

The first few weeks of the year has seen the arrival of many babies of the couples of the film industry. While Saif Ali Khan-Kareena Kapoor Khan and Virat Kohli-Anushka Sharma welcomed an addition to their families, some singer mommies are also experiencing the joy of motherhood. Amid Harshdeep Kaur welcoming a baby boy and Shreya Ghoshal announcing her pregnancy, Neeti Mohan too is gearing up for the new phase in her life.

Neeti Mohan flaunted her baby bump for the first time on social media in an Instagram post on Thursday. The Ishq Wala Love artist posed goofily with her belly, before performing the different Pilates exercises for her arms and legs. She quipped that she was 'Mommy' to-be in ‘Full form’ referring to the shape of her stomach.

One of those to comment was her sister, dancer Mukti Mohan, who called her a ‘fit momma.’ Other music celebrities like Rochak Kohli and Richa Sharma also showered their love on the video. 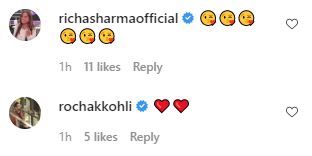 READ: Neeti Mohan Feels 'privileged' To Prepare For 'Motherhood'; Calls It A 'miracle'

Neeti Mohan was recently seen at the baby shower of Harshdeep Kaur. She was seen touching her friend’s baby bump in the heartwarming pictures. On Wednesday, the latter announced that she had been blessed with a baby boy on March 2.

Neeti is married to model-turned-actor Nihaar Pandya. They had shared the news of their pregnancy on February 15, when they celebrated their second wedding anniversary.