Neha Kakkar’s last song, 'Jinnke Liye' was a hit among her fans. She recently posted a few BTS pictures from the sets of the song. Check out the pictures here.

Neha Kakkar is among the most popular playback singers in Bollywood right now. She has given the industry several chartbuster songs and music videos to groove to. The singer is currently quarantining amid the lockdown but still has stayed very active on social media. She recently shared a few BTS pictures from the shooting of her song, Jinnke Liye.

Neha Kakkar recently shared a few pictures from the sets of her song, Jinnke Liye that was released in March 2020. The singer is seen making a difference between what one expects and what one gets in reality. She shared a few pictures where initially she is seen posing like a queen but then ends up laughing off in the last two pictures which makes the expectations vs reality.

Neha Kakkar is seen dressed in a gorgeous off-shoulder gown. The dress had a long trail with an ombre colour. Neha Kakkar had let her hair down and sported a dark maroon coloured lipstick to go with her look.

Check out Neha Kakkar’s pictures from the sets of Jinnke Liye:

As soon as, Neha Kakkar uploaded these pictures many fans took to the comments section to express how wonderful she looked. However, it was one particular comment that took away all the attention. One fan took to the comments section to add “Very dainty” along with a heart emoji. Her brother, Tony Kakkar also commented, “How pretty. The Diva”. Even Vishal Dadlani commented on how pretty she looked. 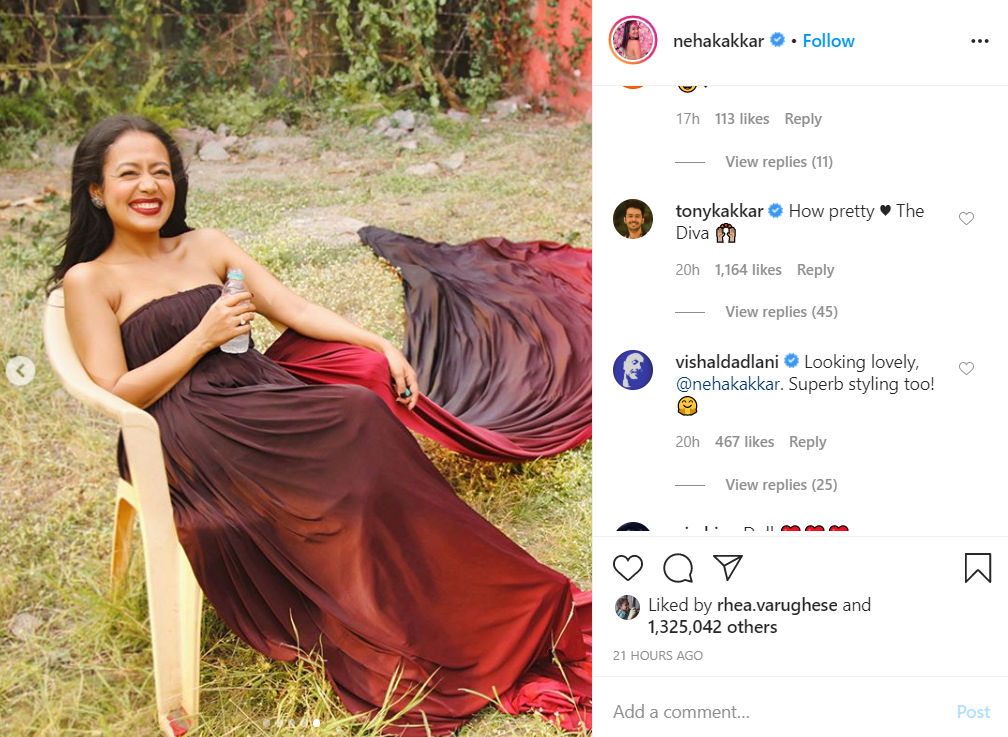 While talking about the song in a previous interview, Neha Kakkar had revealed that she did not talk to anyone on sets as she wanted to bring justice to the meaning of the song. She also added that she wanted to mentally prepare herself so that she could bring in the right emotions for Jinnke Liye. Neha Kakkar also went on to add that she even tapped into some of her experiences which lead to her breaking down on the sets.

PEOPLE HAVE PLEDGED SO FAR
LATEST NEWS
View all
1 day ago
Music composer pritam chakraborty's father passes away at 86 after prolonged illness
1 day ago
Jennifer lopez says 'god has greater plans' for her wedding with alex rodriguez
1 day ago
Ravi dubey says his song 'toxic' revolves around an 'extremely damaged' relationship
23 hours ago
Hariharan, roopkumar rathod and others team up for 'phir tera time aayega'
1 day ago
Yo yo honey singh gets candid about his contemporaries, reveals future plans