Riddhima Kapoor Sahni posted a picture with Ranbir Kapoor and mother Neetu Kapoor and assured her that they are her pillars. Read on for more details.

Riddhima Kapoor Sahni took to her Instagram account and shared pictures with Neetu and brother Ranbir Kapoor with a heartfelt message. Riddhima told Neetu Kapoor that Ranbir and she have got Neetu Kapoor's back and they are her pillars in this difficult time. Read more.

Read | If 'Beyhadh' Is Made In Hollywood, These Actors Would Be Perfect For The Role

Riddhima Kapoor Sahni posted a photo on her social media account with brother Ranbir Kapoor and mother Neetu Kapoor in the frame. Riddhima has captioned it saying, "Got your back Ma." [sic]. Check out the picture below. 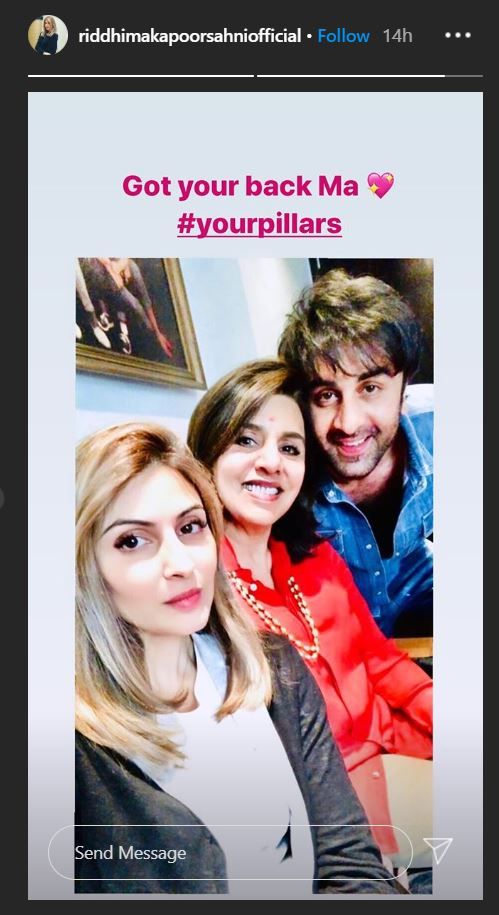 Riddhima Kapoor Sahni was unable to attend the funeral

Riddhima Kapoor Sahni stays with her husband and daughter Samara in New Delhi. Due to the Coronavirus lockdown, Riddhima was not able to attend her father’s funeral in Mumbai. However, she attended her prayer meet that the Kapoors had organised in memory of Rishi Kapoor. Bollywood actor Alia Bhatt and director Ayan Mukherjee, who are very close to the family, were also seen at the prayer meet and supporting the family in these tough times.

Riddhima has been posting photos of Rishi Kapoor. In one picture that she posted, Riddhima can be seen sitting with her father Rishi Kapoor. Riddhima wrote in the post that she loves him and shall miss him always. Riddhima also called Rishi Kapoor her strongest warrior and mentioned how she would miss their FaceTime calls daily. 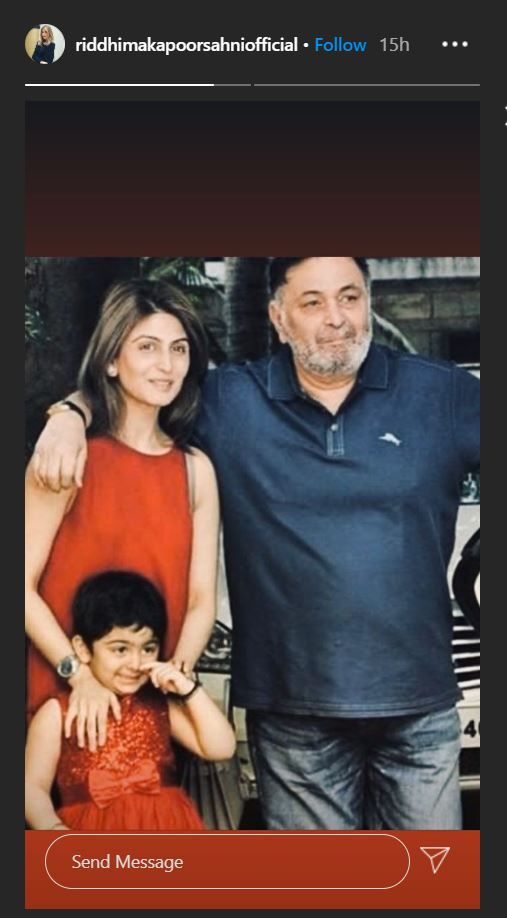 He remained jovial and determined to live to the fullest right through two years of treatment across two continents. Family, friends, food and films remained his focus and everyone who met him during this time was amazed at how he did not let his illness get the better of him. He was grateful for the love of his fans that poured in from the world over. In his passing, they would all understand that he would like to be remembered with a smile and not with tears.

In this hour of personal loss, we also recognise the world is going through a very difficult and troubled time. There are numerous restrictions around movement and gathering in public. We would like to request all his fans and well-wishers and friends of the family to please respect the laws that are in force.  He would not have it any other way." [sic]

Read | Asha Negi Talks About Her Kissing Scene From 'Baarish Season 2', Says It Was Awkward

PEOPLE HAVE PLEDGED SO FAR
LATEST NEWS
View all
5 hours ago
Dilpreet Dhillon breaks down over being trolled, asks 'Did I murder anyone?'
7 hours ago
Singer Jubin Nautiyal's whopping net worth will leave you stumped; Details inside
11 hours ago
The Weeknd supports various 'Black Lives Matter' causes; donates a whopping $5,00,000
6 hours ago
Jubin Nautiyal's hit songs from 'Marjaavaan'; From 'Tum Hi Aana' to 'Kinna Sona'
6 hours ago
'Film industry got little insecure': Palash Sen asks, 'why should music rely on actors?'