Indian film actor Celina Jaitly took to Instagram to share a short glimpse of the trailer from her film Seasons Greetings and share happy news with fans.

Indian film actor Celina Jaitly took to Instagram on Thursday, November 19, 2020, to share a short glimpse of the trailer of her film Seasons Greetings. The actor also penned happy news revealing that the film is selected at the Standlone Awards and Film Festival in the USA. As soon as the actor shared the post online, fans could not stop themselves from commenting on all things nice in the comment section.

Taking to her Instagram handle, Celina Jaitly went on to share the happy news with her fans as she revealed that her film Seasons Greetings - A tribute to Ritoporno Ghosh is selected at the Standlone Awards and Film Festival in USA. The actor shared a promo video of the film in which she can be seen essaying the role of Romita.

In the promo video, Celina Jaitly is seen playing the role of a young woman who falls in love with a young man. Her mother does not seem to approve of the relationship but Romita goes on further to loving him. Along with the video, the actor penned a note revealing the happy news to her fans. She wrote, “Our film SEASONS GREETINGS- A TRIBUTE TO RITUPORNO GHOSH selected at Standlone Awards and Film Festival in USA”.

The actor also added that this is the first of its kind film festival for independent filmmakers. She also revealed, “Based in California, USA, this festival is consolidating filmmakers around the world for a wonderful presentation of cinematography and the unveiling of new talents”. Take a look at the post below.

As soon as Celina Jaitly shared the post on her social media handle, fans went all out to comment on all things nice. The post also went on to garner several likes and comments from fans. Some of the users went on to congratulate the actor and the makers of the film, while some went on to laud the film for its storyline. One of the users wrote, “All the best”. While the other one said, “loved. Loved. Loved this film. so happy for this”. Take a look at a few more comments below. 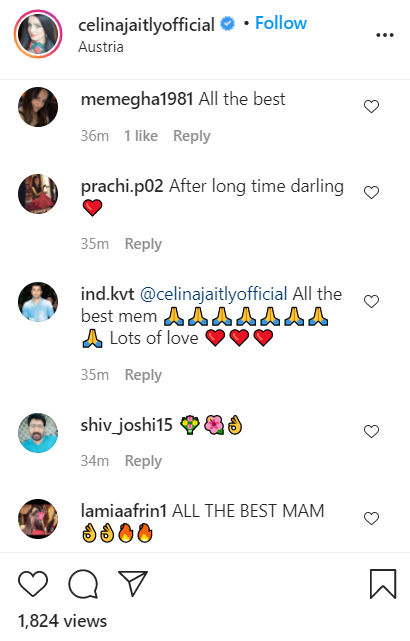 Also read | On Vienna Attack, Celina Jaitly Who's Based In Austria Expresses Shock; Others React