Prabhas shot to fame with Dharma Production's Baahubali series. The actor never fails to mesmerise his fans with his looks. Read to see his stylish avatar.

Prabhas is known for his jaw-dropping performance in the Baahubali series, which grossed a fortune at the box-office collection worldwide. Prabhas made a grand entry in Bollywood with Dharma Production's another venture Saaho which was a huge success. The movie also stars Shraddha Kapoor and Jackie Shroff in pivotal roles. Apart from his debut film in the Hindi Cinema, the superstar has garnered a lot of popularity with his wonderful styling in various films. His personality never fails to amaze the fans. Here is a list of the times when he stole many hearts as he showcased his fashion sense.

All the times when Prabhas showcased his mesmerising stylish avatar

Prabhas looks extremely stylish while donning this distinct blue shirt and rigid blue denim jean. The sky-blue shirt has cross buttoned designs with round neck styled hoodie. The denim jean has rugged textures to make it more stylish. He finished his look with dark shades and brown shoes.

Also Read | Prabhas to Mahesh Babu: South celebs who have their wax statues at Madame Tussauds

This look from Saaho's ending has undoubtedly taken many hearts. This handsome avatar of Prabhas makes him appear like a heart stealer. He is seen wearing a shiny royal blue blazer with a shiny black tie and shirt. The superstar finishes his look with blue denim and slick beard.

Also Read | Prabhas' rumoured GF Anushka Shetty to get 'hitched' not with him but an Indian cricketer?

Here's wishing the Darling of everyone Prabhas a very Happy Birthday. May this year be bigger, better and spectacular! #HappyBirthdayPrabhas #HBDDarlingPrabhas pic.twitter.com/SbMZLw4T8Y 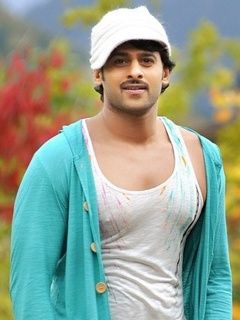 (Still from the movie Darling)

Prabhas looks like a chocolate boy in this charming attire from the movie Darling. The actor is seen wearing a white tank t-shirt and a blue jacket. The body-fit tank t-shirt reveals his muscular personality. The blue hoodie jacket is designed with huge brown buttons and he completed the cute avatar with a white beanie cap.