From 'Katyar Kaljat Ghusali', 'Fakta Ladh Mhana' to 'Choricha Mamla', here are some of Amruta Khanvilkar's best movies to watch over the long weekend. 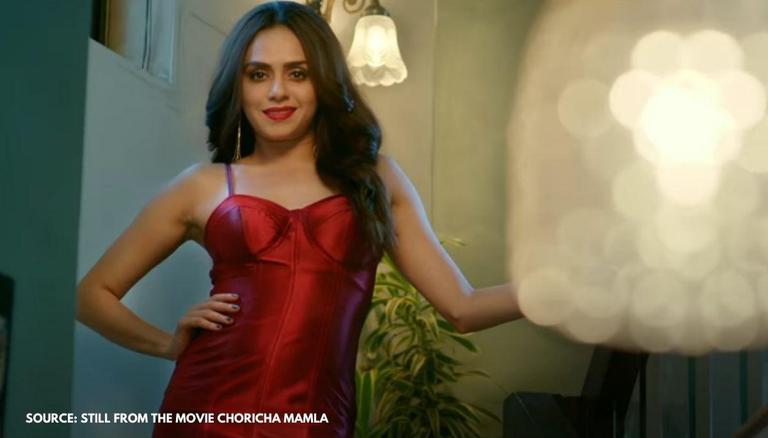 With an IMDb rating of 8.8, Katyar Kaljat Ghusali is not only one of Amruta Khanvilkar’s best movies but one of the finest Marathi films ever made. Including an ensemble cast of actors Sachin Pilgaonkar, Shankar Mahadevan, Subodh Bhave, Amruta Khanvilkar and Mrunmayee Deshpande, this film was directed by Subodh Bhave. The film explores the clash of two musical families where greed takes the front seat. However, in the end, music is the winner.

Released in the year 2015, Welcome Zindagi is another best Amruta Khanvilkar movie. The film has an IMDb rating of 7.9 and stars Swwapnil Joshi, Amruta Khanvilkar and Bharti Achrekar in pivotal roles. The film is a dark comedy about a girl who wants to end it all and a boy who changes her perception of life.

Revolving around the world of a group of friends in their final year of graduation, the story of Satrangi Re follows their passion for music and how their lives go on a roller coaster ride focusing on their different relationships. The film stars Siddharth Chandekar, Bhushan Pradhan, Soumil Shringarpuri and Amruta Khanvilkar in the lead roles. Satrangi Re has an IMDb rating of 6.9 and is directed by Aditya Sarpotdar.

Choricha Mamla is a recently released film, which has an IMDb rating of 6.5. Directed by Priyadarshan Jadhav, the film features Hemant Dhome, Balachandra Gaekwad, Kshitee Jog and Amruta Khanvilkar in the lead roles. The hilarious Marathi film follows the story of Nandan, a thief who steals for a living but only up to his needs. He enters a politician’s farmhouse but his way out is not as easy as it seems.

Fakta Ladh Mhana is another of Amruta Khanvilkar's movies which is worth watching. The film is directed by Sanjay Jadhav and Mahesh Manjrekar and has a rating of 6.4 on IMDb. The film cast includes actors Nagesh Bhonsle, Shrirang Deshmukh, Bharat Jadhav, Siddharth Jadhav. Amruta Khanvilkar played the role of a Lavani dancer in the film and received critical appreciation for her role in the film.