Actor Prithviraj Sukumaran recently took to Instagram to remember lyricist and poet Anil Panachooran, after the celebrated artist passed away on Sunday. He put up a throwback picture of the writer and accompanied it with a heartfelt caption. Anil Panachooran passed away at a private hospital in Kollam after suffering from a heart attack, according to various media reports. He was 55 years old and had played a pivotal role in the evolution of the Malayalam music industry.

Actor Prithviraj Sukumaran recently took to Instagram to remember late artist Anil Panachooran through a portrait photograph. In the picture posted, the celebrated lyricist is seen posing for the camera while donning a simple and casual outfit. He is spotted wearing a bright red jubba which has a simple stripe design all over. Anil Panachooran is also sporting a slight smirk across his face while looking intently into the camera.

In the caption for the post, actor Prithviraj Sukumaran is remembering the late artist and his contribution to Indian cinema. He has simply written, “Rest In Peace” while mentioning his name through a direct hashtag at the end. He has also added a ‘joining hands’ emoticon to express his thoughts better. Have a look at the post on Prithviraj’s Instagram here.

In the comments section of the post, a few people have spoken highly of Anil Panachooran’s mesmerizing lyrics which will remain evergreen and impactful. They have also expressed their heartfelt condolences for his family and friends, who have been close to the artist, over the years. Have a look at a few comments on the post here. 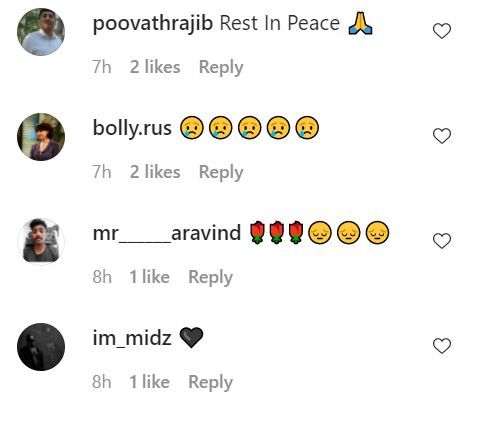 Anil Panachooran is a much-loved poet, who was diagnosed with COVID 19, a few weeks back. He was undergoing treatment for the same when he suffered from an unexpected heart attack at a private hospital in Kollam. The remarkable poet left a distinct mark on the Malayalam film industry with his work in films like Arabikadha and Katha Parayumbol. He also penned a few famous poems like Valayil Veena Kilikal and Anadhan, amongst others.