KGF star Yash and Radhika Pandit introduced their son in a cute family pic. They create fan frenzy over the little one, who fans termed as 'Jr Rocky'.

It was a moment that fans of KGF star Yash were waiting for, and the actor created a sensation by sharing the first picture of his son on social media. After actor-wife Radhika Pandit had shared a glimpse a day before he turned six months old, the family made the landmark special with heartwarming moments.

The moment all of u were waiting for.. Yes tomorrow, Junior turns 6 months!! He will be ready to greet u all.. are u guys ready for him!! ðŸ¤— #nimmaRP #radhikapandit P.S : Thanks Amrita for this memorable shoot! @mommyshotsbyamrita

Radhika had earlier shared an adorable snap of their daughter Ayra sitting with her brother, sleeping dressed up in all white, but visible only partly. She had termed it as the 'moment all were waiting for', as ‘Junior turns 6 months’.

A day later, the couple shared the first picture of him showcasing his cute smile lying on his chest. Yash called him as his ‘little buddy for life’. Radhika called him the ‘apple of my eye’, ‘the rainbow of our family’, while being sure that he’d be a ‘Mama's boy’ and called him their ‘lil Junior ’.

The couple urged their fans and followers to send their blessings.

READ: 'KGF' Actor Yash's Son To Turn 6 Months; Wife Radhika Says 'He Will Greet You All'

Yash, Radhika and Ayra also conducted a special photoshoot with the newest member of the family, the trio showing their smiles, with the kids in their parents’ arms and the younger one in deep sleep.

Netizens went gaga over the pictures, terming it 'cute', 'adorable' and posting emojis galore. The interesting bit was how the little one was being 'Junior Rocky bhai' over his father's character name in KGF, and many quipping he'll star in KGF 5. 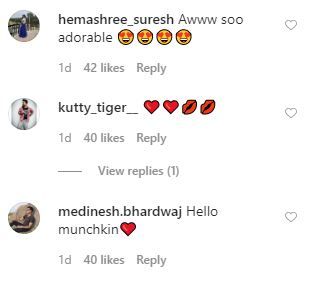 Yash and Radhika had welcomed their son in October 2019. Their daughter Ayra was born in December 2018. Pictures and videos of the family regularly keep going viral on social media.

Meanwhile, on the professional front, Yash had bee shooting for the much-awaited Kannada film KGF 2. The films is gearing up for release on October 23. However, with the lockdown amid the COVID-19 pandemic, it is not clear if the makers will stick to the release date.

PEOPLE HAVE PLEDGED SO FAR
LATEST NEWS
View all
6 hours ago
'Bigil' movie cast's Net Worth proves they are 'Gangsters' even in the film industry; read
6 hours ago
'Ponmagal Vandhal' cast members host digital premiere ahead of its OTT release
2 hours ago
Can Alllu Arjun, Rana Daggubati & Mahesh Babu be the new Amar Akbar Anthony in the south?
5 hours ago
Samantha's fans trend #PoojaMustApologise after Pooja Hegde's 'hacked' account's post
5 hours ago
Suriya after watching 'Ponmagal Vandhal': I am satisfied as a producer and viewer