Manju Warrier is all about loving her fans. She was emotional when a little girl gave a special token of appreciation. Read what she wrote for her fan.

Manju Warrier took to her Instagram to pen down her gratitude towards a little fan who gifted her a rose. Manju Warrier made a comeback in films after 15 years since her marriage in 1998 with How Old Are You?. The film performed well and received many positive reviews. Since the come-back, Manju Warrier has always been thanking her fans. She recently appreciated the gesture of a little fan with a beautiful post. Manju Warrier's Instagram post if proof of her emotions towards the fan.

Manju Warrier's Instagram post shows her accepting a rose from a little girl. Manju is smiling at the little girl as she is starstruck in the frame. Manju Warrier penned a heartfelt note for her fan. She wrote, “When a child gives you a gift, even if it is a rock they just picked up, exude gratitude. It might be the only thing they have to give, and they have chosen to give it to you. #purestlove #gratitude”. Manju Warrier expressed her gratitude towards her fans for the constant support. 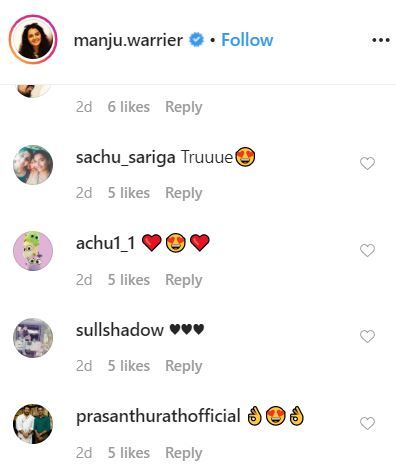 Manju Warrier has been a prominent actress until 1998. She even received the special jury award for her last films in 1998 that is Kannezhuthi Pottum Thottu and Kerala State Film Awards for her acting in Eee Puzhayum Kadannu. The actress has a huge fan-base. They continued to love her films despite the huge break. She was also seen in hit films like Odiyan that released in 2018. She was last seen in her Tamil debut film Asuran in 2019, which starred Dhanush in the lead role. She even won the best actor in the female award for the same film.