Nani recently released a new 'Tuck Jagadish' poster while announcing the release date on Pongal 2021. Have a look at the poster with all details here.

Actor Naveen Babu, also known by his stage name Nani, recently took to social media to share the release date of his upcoming drama film, Tuck Jagadish. In the new poster shared, the actor is seen surrounded by a bunch of family members as they are celebrating a special occasion together. Through the caption for the post, the actor has indicated that he is quite elated to present this film at the theatre after the long break and has also mentioned that the film has been scheduled for April 16, 2021. His fans have also flooded the comments section with compliments as they have been eagerly waiting for this entertainer.

Actor Nani recently announced the release date of Tuck Jagadish, which has been creating a lot of anticipation amongst the fans. He shared a poster of the film which mentions that the film will release on the occasion Pongal 2021 on April 16th. The film is also expected to star Aishwarya Rajesh and Ritu Varma in pivotal roles.

In the new poster of this family entertainer, Nani is seen playing the character of Jagadish while he is surrounded by his delightful family members. He is seen sitting on a small wooden stool while the family carries out a series of traditions and rituals. He is seen blissfully smiling while a sacred thread is tied on his right wrist. All family members are seen enjoying to the fullest while a temple is spotted in the background. Jagadish is seen wearing a Kanchivaram lungi while proper Mehendi designs have been sketched out on his palms.

The poster also features actor Nassar and Rohini amongst others. In the caption for the post, Nani has written that he is excited to present this new drama. Have a look at the poster of this Shiva Nirvana film here.

In the comments section of the post, a bunch of people have expressed their excitement for the upcoming film. Some fans have also used a bunch of emoticons to express themselves. Have a look. 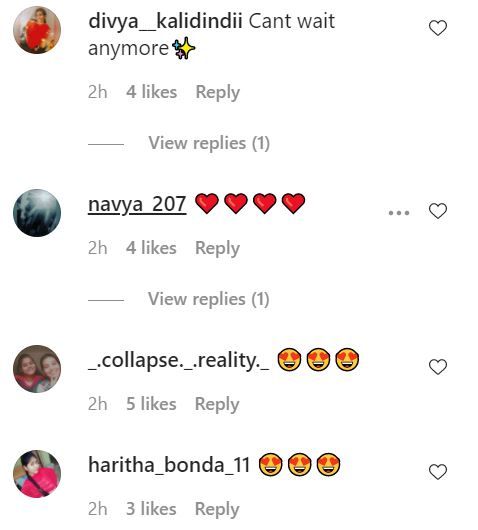