Nani Shares A Picture With Wilson From The Film 'Cast Away' & It Is Unmissable, See Here

Actor Nani took to his Instagram to share a picture with Wilson from the 2000 film Cast Away. Check out the picture below. Read to know more.

Amidst the Coronavirus lockdown, just like everyone else, actors from the Indian film industry have turned to social media for entertainment. During this time, social media has played a very important role as the actors are able to reach out to their fans. Actor Nani who is known for his work in Telugu cinema has also been very active on Instagram. He is known to keep his fans updated with his day to day activities.

Nani's recent post has captured everyone's attention. On April 15, the actor took to his Instagram to post a picture with Wilson from the 2000 American survival drama film Cast Away.  Wilson is basically a volleyball. But in the film, the volleyball serves as Chuck Noland's (Tom Hanks) only personified friend during the four years of his life that he spends on a deserted island.

After posting this picture, it is not a secret anymore that Nani is a fan of the film Cast Away. He posted the picture and took the internet by storm. The Krishna Gaadi Veera Prema Gaadha actor captioned the picture using hashtags, #CastAway #wilson.

Check out the picture posted by Nani

Several fans of Nani reacted to this picture. The picture received about 1 lakh likes in just a few hours. Several fans also commented on the picture posted by Nani. Check out the comments here. 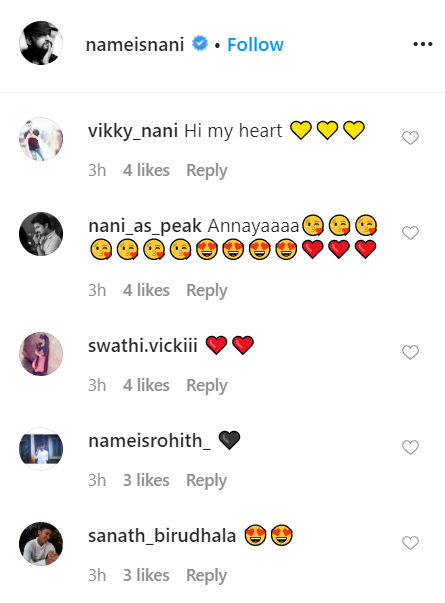 On the professional front, Nani was last seen in the films HIT: The First Case which released in February this year and Gang Leader which hit the screens in September 2019. Up next, Nani will be sharing the screen space with Sudheer Babu, Nivetha Thomas and Aditi Rao Hydari in the Telugu film titled V.

PEOPLE HAVE PLEDGED SO FAR
LATEST NEWS
View all
29 mins ago
Bigg boss telugu star ali reza excited as he returns to hometown hyderabad, shares video
17 hours ago
Mammootty's upcoming political-thriller 'one' will not have an ott release, confirm makers
16 hours ago
Dulquer salmaan' upcoming film 'kurup' is the most expensive film he has done so far; read
1 hour ago
Malavika mohanan say 'master' will be a treat for vijay sethupathi, thalapathy vijay fans
17 hours ago
Pawan kalyan starrer 'vakeel saab' to resume shooting? read here