Jersey actor Nani and his wife Anjana Yelavarthy rung in their eighth anniversary with a sweet and cosy date on Wednesday, October 27, 2020.

Taking to her Instagram stories, Anjana Yelavarthy went on to share a picture with her hubby and also revealed how they managed to make the date possible despite Nani’s busy schedule. In the picture, the duo can be seen all smiles for the camera. Nani can be seen taking the selfie while Anjana adorably rests her head on his shoulders and her hand on his chest as she strikes a smile. Nani can be seen sporting a light coloured shirt. In the background, one can see the full moon in the clear dark blue sky.

Along with the picture, Anjana also penned a sweet note for her hubby and also revealed how she feels being married to Nani for eight years. She wrote, "Finally managed to squeeze in a lovely date night with this boy amidst a hectic shoot schedule”. She added, “My friend asked me if it felt like we were married for 8 years? The answer was a prompt No! And I think that's a win”. Take a look at the post below. 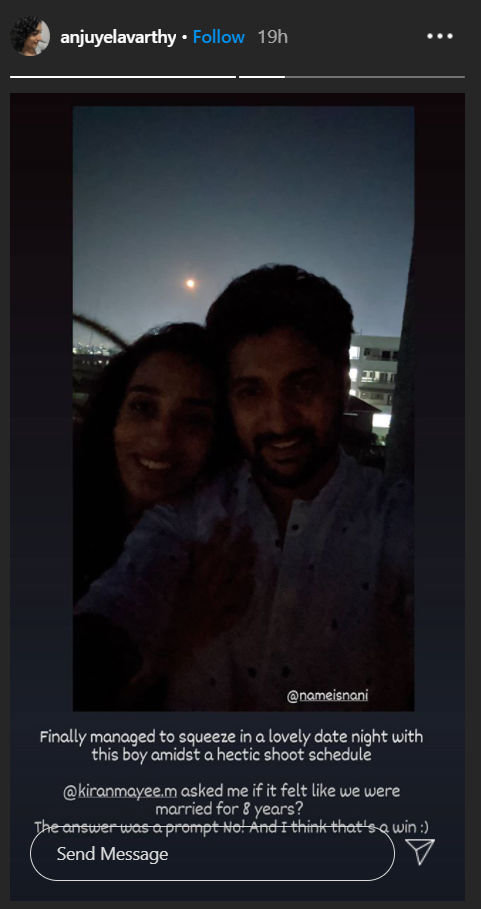 Nani and Anjana are totally in love with each other, even after so many years of being together. Nani and Anjana were dating for five years before they tied the knot on October 27, 2012. In 2017, the couple welcomed a baby boy named Arjun. They named him Junnu and sometimes share pictures of their child.

Also read | Nani's 'Jersey' To Be Screened At Toronto Film Festival, Fans Say That He 'deserves It'

4 years ago this crazy boy happened to me and I've never looked back! #happyanniversary

Also read | Nani Teases A Big Announcement About His Next Film 'V'; Hints At An OTT Release

WE RECOMMEND
1 month ago
Nani begins shooting for his film 'Tuck Jagdish'; shares BTS pic from the sets
1 month ago
Nani reveals 'Shyam Singha Roy' to feature Sai Pallavi and Krithi Shetty
1 month ago
Sai Pallavi-Varun Tej or Sai Pallavi-Nani: Which is a more bankable pair in Telugu cinema?
2 months ago
Aditi Rao Hydari spells elegance while posing as her character Saheba from 'V' movie
1 month ago
Nani seeks his mother's blessings as she celebrates her birthday; see pic